What do Jedward, Engelbert Humperdinck and largely-ignored human rights abuses have in common? They will all be present in Azerbaijan this weekend.

What do Jedward, Engelbert Humperdinck and largely-ignored human rights abuses have in common? They will all be present in Azerbaijan this weekend. 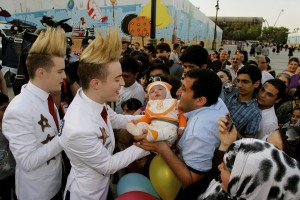 The cringey-pop madness of the Eurovision Song Contest will take place in the country’s capital Baku on Saturday, with 42 European countries competing in the annual music competition.

The frivolity of the contest, which is frequently heralded as a fun pick-me-up for Europeans stuck in austere times, is covering up a much darker truth about Azerbaijan’s appalling human rights record.

Last May, Azerbaijan secured the right to host this year’s Eurovision song contest thanks to its winning entry “Running Scared”. Only a few months earlier, this is, quite literally, what hundreds of peaceful protesters were doing in downtown Baku, as police violently sought to silence them.

20 years of independence, economic prosperity and relative stability have failed to translate into greater fundamental freedoms for its citizens, while the consolidation of authoritarian rule under President Aliyev has been largely ignored by the outside world over the last decade.

While Eurovision will offer an opulent stage for voices from across Europe, at home few critical voices are tolerated. Self-censorship has increased. Criticism of the president and leading government figures is frequently punished – whether it is voiced through politics, journalism, satire, activism, education, or even social networking websites.

Throughout the year leading up to Eurovision, Azerbaijan authorities conducted a “beautification” urban development project that led to families living around the Baku Crystal Hall, the competition’s venue, being illegally evicted from their homes.

“In Azerbaijan, Eynulla Fətullayev, a 34-year-old editor of two newspapers critical of the Azerbaijani government, has been jail in since 2007 on a series of trumped-up charges designed to silence him.”

Last year, a young activist, Jabbar Savalan, was arrested for posting an article critical of the government on Facebook. Savalan was beaten by police in custody, forced into signing a confession of drug possession and sentenced to two years in jail. In December 2011 he was released by a Presidential pardon.

The criticism aimed at the Eurovision organisers echoes that experienced recently by organisers of the grand prix in Bahrain. Protestors rallied against the event, believing that Bahrain’s poor human rights record left them undeserving of hosting the race. The Bahrain Grand Prix went ahead and there is very little chance of the Azerbaijan losing the Eurovision contest now.

• May Mosley: F1 should not become an instrument of oppression of the Bahrain government 7 Jun 2011

Organisers of these big events need to start realising that by allowing these countries to host while turning a blind eye, they are ultimately granting approval of their unacceptable regimes.