The Centre for Policy Studies (CPS) today publishes a (pdf) claiming lower taxes lead to higher economic growth. The report presents the results of regression analysis covering a number of advanced countries since 1965 to back up this claim.

This is not the first report to argue lower taxes lead to higher growth, and it will not be the last. However, there are also many reports, also backed up by statistical analysis, that refute this claim. At the most basic level, in advanced countries there is no correlation between tax revenues (in relation to overall GDP) and growth in GDP per head.

As Graph 1 shows, looking back over the last 40 years (the results are very similar if a shorter timeframe is used), and across the 22 OECD nations for which data are available, the correlation between average tax revenues as a percentage of GDP and GDP per head growth is zero. 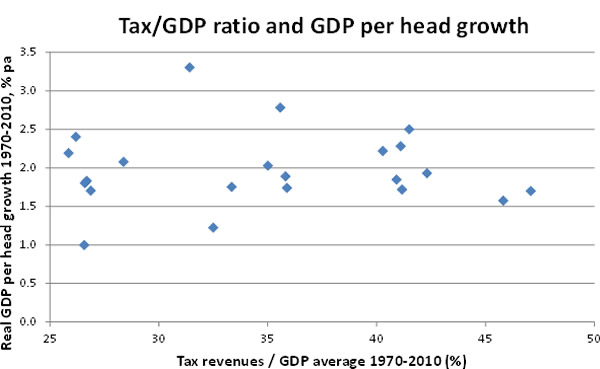 Similarly, countries with the highest tax revenues in relation to GDP also have a mixed record on growth.

But per capita growth rates have been very similar in the three countries over the last 50 years.

The authors of the CPS report will reply that this is a partial account and that their analysis is more sophisticated because it takes into consideration other variables that theory suggests affect growth, such as levels of investment and labour force growth. This would be a valid criticism, were it not for the fact that their results (p.15) show there is no statistically significant relationship between any of these variables (other than the initial level of GDP per capita) and growth.

This must have been a totally unexpected result and yet, surprisingly, there is no mention of it in the report.

The authors could have concluded from their analysis that governments are wasting their efforts when trying to increase levels of investment in the economy because doing so does not boost growth. This would have attracted a lot of attention – but it would also have attracted a lot of criticism because it flies in the face of accepted economic wisdom.

This result highlights the danger of drawing conclusions from regression analysis of this type.

If the results suggest a relationship widely believed to be true – that higher investment spending leads stronger growth – does not hold, then any other relationship that is identified must be thrown into question.

The explanatory power of the equations is also poor, suggesting important explanatory variables have been omitted from the analysis. Some of these may be correlated with the size of tax revenues and this throws further doubt on the purported relationship between taxes and growth.

Many things determine per capita growth rates in advanced economies. Some people believe the level of taxation is one and would like robust statistical evidence to back up their view. This report, despite its claims, does not provide that evidence. A convincing case that a higher level of taxation leads to lower growth has yet to be made – probably because it is not true.