The Trayvon Martin case, and the investigations into racism in the Met, provide a much needed pretext for an open, honest discussion of a difficult subject.

Rebekah Delsol is program officer for Ethnic Profiling at the Open Society Justice Initiative. Michael Shiner is Senior Lecturer at the London School of Economics and Co-Director of the Mannheim Centre for Criminology. Both are members of StopWatch, a campaign for fair and accountable policing.

Recent events on both sides of the Atlantic have opened up a space for a meaningful, honest discussion about police racism.

This week, George Zimmerman formally pleaded not guilty to murdering the unarmed black teenager Trayvon Martin. Zimmerman was charged with the murder in Florida after a delay of some six weeks, amid a wave of international outrage.

A few days later in Britain, the Crown Prosecution Service reversed its original decision not to charge a Metropolitan police officer with racially aggravated offences after he was recorded racially abusing a 21 year old black suspect, Mauro Demetrio, during last summer’s riots. 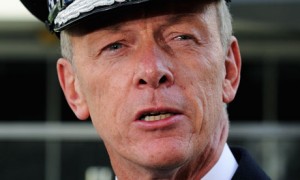 Following a string of further complaints, there are now 12 separate cases of alleged Met racism under investigation, involving 26 police officers and one civilian staff member. Just last week, a fresh racism allegation was made to the police complaints watchdog involving a black fireman who claims he was abused and tasered by the Met while trying to assist them.

The events of the last few weeks have transformed the terms of the debate about police racism in Britain. Since the Stephen Lawrence Inquiry branded the Metropolitan Police Service and other services as ‘institutionally racist’ some 13 years ago, the primary police response has been one of collective denial.

Officers have widely dismissed Macpherson’s report as an attack on the integrity of the service, whilst attributing the failings it highlighted to incompetence rather than racism, and reassuring themselves that disparities in stop and search can be explained away by the demographic make-up of the ‘available population’.

In a single stroke, PC Alex MacFarlane’s well publicised use of the N-word appears to have swept away these defences, at least temporarily. Faced with a smoking gun, Bernard Hogan-Howe, the Met commissioner, has vowed to drive racists out of the service.

Accusations of police racism are, of course, nothing new. Black communities have had to deal with the tragic paradox of being over-policed and under-protected for years. As the debate has moved beyond the normal denials, however, the lid has been lifted on what has, until now, been part of the private lives of black people – ‘that conversation’, in which parents brief their children on how to handle the police. As one parent reported:

‘I’m a black father, of course I had tried to prepare my son for police. I talked about my experiences but nothing could prepare him for the visceral humiliation, a man in uniform screaming in his face. He was never the same again.’

Official statistics tell us that black people are stopped and searched by the police at seven times the rate of whites, and that this disproportionality has been getting worse rather than better in our main urban areas since the publication of the Lawrence Inquiry. Last year more than one in four stop searches carried out by the MPS were of children below the age of 18 years and, on average, a child below the age of 10 was stopped and searched every week.

• The hidden legacy of the Stephen Lawrence case 15 January 2012

• Stephen Lawrence: The legacy that lives on, the hope, the dreams of a better future 4 January 2012

• What will Cameron do to end the racism of the young Conservatives? 23 November 2011

Behind the statistics, this means young people being treated with suspicion on the way home from church, whilst socialising with friends or in their front yard when they have popped out to lock-up their bike. Some come to accept routine police interference as a fact of life, while others stop going out or change their dress or hairstyle so as not to attract police attention. Some get angry, others get depressed. As a mother from Wandsworth told us:

‘I saw my bright sparky 16-year old turn into a young man with no hope. The police see him as a black criminal in a hoodie no matter what he does. I feel like [the police] screwed up my little boy.’

Before deciding that stop and search is the price to be paid for community safety, we should remember that fewer than one in ten stop searches result in arrest. The Home Office’s own research estimates that stop and search reduces the number of ‘disruptable’ crimes by 0.2 per cent.

While Section 60 searches under the Criminal Justice and Public Order Act 1994 have become central to the police response to knife crime, fewer than one in two hundred searches result in an arrest for possession of an offensive weapon or dangerous instrument. Unsurprisingly, a Home Office evaluation concluded that the government’s Tackling Knives and Serious Youth Violence Action Programme has had no measurable impact on levels of knife crime.

While stop and search in general has little, if any, measurable benefit in terms of crime reduction and community safety, the damage it does is tangible. It is this that needs to be discussed. Police tactics are put under the spotlight by a new play, Stop Search, premiering at the Broadway Theatre, Catford from April 27th to May 26th. Drawing on interviews with police officers, parents and those on the receiving end of stop and search, the plays lays bare the policy’s human costs, asking those of us who are not on the sharp end of policing whether we are happy with what is being done in our name. Are we?

Stop Search is on at the Broadway Theatre, Catford, London, April 27th to May 26th. For more information visit www.stopsearch.ac.uk.

16 Responses to “Stopping the searches: the need to confront police racism”