Society should place a firm limit on the amount of time we are prepared to tolerate anyone being unemployed, writes IPPR’s Graeme Cooke.

Long term unemployment has more than doubled since the start of the recession. As Graph 1 shows, the number of people out of work for more than a year has risen from around 400,000 in 2007 to reach 855,000 in the three months ending in January 2012.

The majority of people who lose their job find another one fairly quickly, even in a recession – but those who suffer a prolonged period of unemployment risk losing touch with the labour market and face permanently reduced work and income prospects, not to mention the detrimental health and social impacts of being without work. 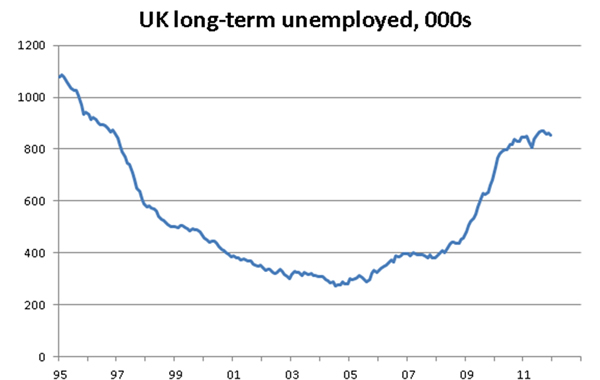 Tomorrow’s labour market statistics are likely to see the jobless total rising on a quarterly basis for the ninth consecutive month and the Office for Budget Responsibility (OBR) predicts the unemployment rate will increase to 8.7 per cent by the end of the summer.

With a total of 2,666,000 people already looking for work, IPPR analysis suggests the unemployment total will rise by a further 100,000 in the coming months. As other respected analysts have shown, this is both unnecessary and damaging – both to individual’s lives and the national economy.

• The questions that George Osborne must answer 17 Nov 2009

Based on the OBR projections and current patterns of unemployment flows and durations, IPPR also expects the number of people out of work for a year to go up by a further 107,000 by the end of the year to hit almost a million – 962,000.

This is the ‘hidden crisis’ of the current era of stagnation that the British economy is experiencing.

With the economy likely to just about avoid a double-dip recession, there is no immediate reason to expect the headline unemployment total to spike. But neither is there sufficient growth for unemployment to fall.

In this situation, with the public sector continuing to cut jobs and new job opportunities in the private sector relatively scarce, the penalty for being out of work for longer rises – compounding the original problem.

The big worry is whether, when stronger job growth does return, people who have experienced long term unemployment will be able to take advantage. Our society is still grappling with a disastrous legacy of this kind from the 1980s and 1990s recessions: high levels of worklessness, poverty and benefit spending.

There is already some evidence a similar problem might be being stored up again. Before the recession about one in five unemployed people had been out of work for a year. That proportion is now up to a third (during a period when the denominator in that equation has been rising rapidly).

And while there has rightly been a strong focus on youth unemployment, it is worth noting that more than two-fifths (43 per cent) of the over-50s who are out of work have been unemployed for more than a year.

The government’s response to this problem is its flagship Work Programme. It is too early to tell how effective this policy is being, though there is no obvious dent in the unemployment numbers despite provider contracts being up and running for many months now.

Concerns have already been raised about the likely effectiveness of the Work Programme and even under the best possible performance scenarios, less than half of people going through it will find sustained employment.

So what happens to those who don’t?

At the very least, the government should introduce a job guarantee for those reaching then end of their Work Programme placement without a job, who would at that point have spent three years out of work.

This should provide 25 hours of paid employment, combined with on-going support and job search, which individuals would have to take up or face losing their benefits. It would effectively create a time-limit on JSA.

As we learn more about how well providers are getting on, the debate about the best way to prevent the human and economic tragedy of long term unemployment will sharpen; IPPR believes that while the state, private and charitable sectors all have a vital role in supporting people into work, society should place a firm limit on the amount of time we are prepared to tolerate anyone being unemployed.