The ‘recovery’ in the labour market over the most recent quarter has been characterised by part-time work and slowing wage growth; this is not good news. 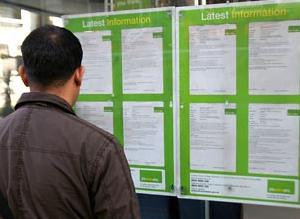 But a glance beneath the headlines reveals some worrying signs of continuing weakness in the labour market:

• The claimant count measure of unemployment (which only counts those actually claiming Jobseeker’s Allowance) rose by 3,600 in March 2012 to 1.61m, its highest since October 2009 and up 145,200 over the past year;

• Youth unemployment remained above the one million mark and the number of long term unemployed people rose by 38,000 on the quarter;

• The rise in employment was driven by a rise in part-time work, with the number of people in full-time work down by 27,000;

• There was another rise in ‘under-employment’ with an additional 89,000 people working part-time because they cannot find a full-time job;

In other words the ‘recovery’ in the jobs market is being driven by part-time work and precarious employment rather than full-time, permanent positions.

There was even grimmer news on the wages front. As Graph 1 shows, total pay growth fell to just 1.1%, the weakest reading in 20 months. Normally one would expect rising employment to be accompanied by a pick-up in wage growth as the demand for labour increased.

The part-time and precarious nature of the current recovery means this is not happening. The slowing of pay growth suggests a lot of slack remains in the labour market. 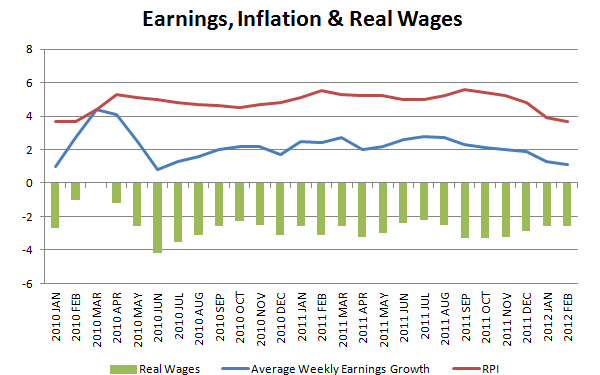 The falls in inflation since its peak last autumn should be providing a boost to household incomes and supporting consumer spending, but the slowing of wage growth means real wages (nominal earnings minus inflation) continue to fall.

Since peaking at 5.6% in September last year RPI fell to 3.7% in February, a drop of 1.9%. However during the same period earnings growth fell from 2.3% to 1.1%. So whilst real wages were falling at an annual rate of 3.3% in September they are now falling at a pace of 2.6%, better but still grim news for hard pressed households.

The large fall in inflation is not feeding through into real incomes, which face additional pressures from the changes to the tax credit system.