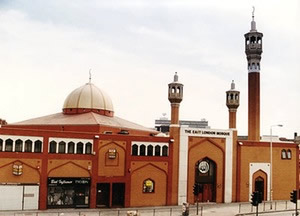 Rebecca Wainwright is an MArch2 postgraduate student at the Welsh School of Architecture in Cardiff University and Peter Allen is a doctoral researcher and sessional lecturer in the Department of Politics at Birkbeck College, University of London.

The recent call by Baroness Sayeeda Warsi for a Europe, and Britain, that is ‘more confident and more comfortable in its Christianity’ is an attempt to rejuvenate a supposedly embattled Christianity in a Britain that is overrun by totalitarian militant secularists.

Not only a reaction against those who dispute the role of faith in public life, her comments can also be located in the wider context of  recent government interventions in this area – that multiculturalism is broadly discredited, no longer worth pursuing, and that assimilationist policies are the way forward.

Looking at the built environment of our capital city, the changing nature of mosque architecture in east London highlights a shift from the previous pursuit of multiculturalist ideals by government, and in this specific case, the physical presence of Islam, to an era of opposition to the development of Islamic buildings, characterised by a desire to preserve the dominance of Christianity in the built environment.

“If the city is the world which man created, it is the world in which he is henceforth condemned to live. Thus, indirectly, and without any clear sense of the nature of his task, in making the city man has remade himself.”

If the urban environment can act as a mirror to society, then architecture has a role and responsibility in the production of social change.

The role of architecture in the expression of Islamic faith and cultural identity in modern Western cities has provoked prominent and widespread debate, fuelled in recent years by global attention to high-profile projects such as the Park 51 scheme in New York and the Abbey Mills Mosque project in Stratford, East London.

The inclusion of faith buildings within British cities is an important issue to resolve when considered in the context of anti-multiculturalist attitudes.

The mosque provides a particular source of contention, representative of Islam as a cultural ‘other’ in the face of an increasingly secular society, and often sharply contrasting with accepted urban forms, reinforcing an oppositional identity with a foreign architectural discourse of domes, arches and minarets.

Recent global events, particularly the 9/11 and 7/7 Al Qaeda attacks, have given new or revived meaning to this explicitly Islamic architectural language.

Benefitting from the pluralistic model of 1980s multicultural policy, The East London Mosque was a purpose-built mosque designed with the full inventory of Islamic paraphernalia including domes, minarets and arched windows – a symptom of a positive assertiveness in the representation of Islamic identity in cosmopolitan cities.

The building’s visual claim on public space was furthered by its broadcast of the azan (the call to prayer), which inspired protest from local non-Muslim residents claiming the azan constituted noise-pollution. Responding to such protests, the mosque committee likened such ‘pollution’ to that of church bells.

Although this was dismissed by many of the protestors as irrelevant given the rarity and diminishment of such tradition, it raised the question of what is deemed culturally acceptable – how far the expression of a culture considered a ‘minority’ can encroach into the surrounding environment of the dominant, Christian culture.

One local protestor is quoted saying:

“I’m sure I would sooner listen to the tolling of church bells than someone screaming out words I cannot understand and don’t want to.”

The presence of “other people within the space of the nation” can cause a reactionary ‘emotional attachment to national community’ and an obligation to defend what is believed to be a way of life.

This claim is evident in the local residents’ rapid defence of Church bells which despite their apparent irrelevance to the modern community, are considered preferable to the intrusion of the undesirable, ‘alien’ azan.

The Brick Lane Mosque in Aldgate East, also known as Jamme Masjid, has historically been a place of worship for many minority (and often persecuted) religious groups. Throughout its multiple incarnations, the exterior of the building has remained mostly unchanged from its original eighteenth-century chapel design.

The modifications of the existing building to accommodate a Muslim congregation were met with considerable resistance, despite the fact that most of the changes were internal works, affecting little of the exterior aesthetic.

Dr Noha Nasser identifies the opposition to the adaptation of historical buildings as the result of a ‘politicization of heritage’ with the aim of ‘constructing and redefining “Britishness” and national identity’.

This could be defined, perhaps more accurately, as the re-construction of ‘Britishness’, the conversion of the Mosque seen, by some, as the opportunity to restore the chapel to the Christian identity that it has not embodied for centuries. This is evident in the Brick Lane conservationists’ claim that the chapel was “a vital expression of an indigenous urban culture and landscape”.

Though not explicitly suggested, the opposition to the mosque clearly demonstrates the desire to preserve Christianity as the dominant cultural heritage of the area.

Even with no external expression of Islam, the conversion of the building into a mosque, for the non-Muslims that opposed it, challenged local English heritage purely on the basis of its change of function.

In retaliation to such attitudes, the Bangladeshi community ‘defended their intentions’ by pointing out that the adaptation of the building to accommodate more worshippers would remove them from the surrounding streets, ‘reducing the congestion which tended to inflame racist emotions’.

The building, then, with its disarming outward aesthetics, created a veneer of social acceptability, camouflaging the undesirable congregation of Muslims in the streets.

It would appear that the conversion of the chapel was received in a similar manner as the azan of the East London Mosque; as an unwelcome encroachment of the dominant culture and an unprecedented step towards an environment observed as slightly too ‘Islamised’.

The design of the unrealised Abbey Mills Mosque in Newham sought to actively redefine both the function and the architecture of a mosque in modern Britain. It tried to set a new precedent for what a space for Islam in a contemporary Western city could be.

Media attention, however, succeeded in inflaming public hysteria about the scheme by structuring an oppositional argument based on three main points of contestation: the scale, visibility and location of the project.

Specifically, these factors of the Mosque’s presence constituted, for some, a representation of an Islamic control of the land – a highly visible presence of cultural difference that indicated a triumph or expression of power over the dominant ‘British’ culture.

This attitude is further demonstrated by Phillip Johnston in The Daily Telegraph, who writes that viewers watching television coverage of the Olympics will find that:

‘the most prominent religious building in the camera shot will not be one of the city’s iconic churches that have shaped the nation’s history, such as St Paul’s Cathedral or Westminster Abbey, but the mega mosque. Its arrival in London will be a significant coup for Islam and a major event for the country as a whole’.

The comparison of the Mosque’s scale with that of some of the most readily recognisable symbols of both Christianity and of the capital city, demonstrates the attitude that the Mosque was effectively challenging the dominance of Christianity in the public sphere.

The antagonism that the Abbey Mills Mosque inspired actually preceded the release of any accurate information about the scheme, revealing a fundamental hostility towards the project even in its ‘ideas’ stages – the result of a toxic political and social climate where a building cannot even reach the point of construction due to it its association with the Islamic faith.

Baroness Warsi’s intervention highlights just how little is understood of Islam’s struggle to find representation in modern British cities, and the relentless opposition it receives in the name of preserving Britain’s Christian heritage.

Warsi’s call for a renewed dominance of Christian values relies on an assumption that they are under threat. The examples discussed here suggest that perhaps the opposite is more accurate: that Christianity continues to dominate expectations of faith buildings in Britain, something that is unlikely to change if the government continues with its anti-multiculturalist approach.

• We need to defend the hope at the heart of Christianity, not fight militant secularisation – Ed Jacobs, February 14th 2012

• Anti-Catholic bigotry in Scotland on the rise; all religious hate crimes up 10% – Kevin Meagher, November 18th 2011