Business secretary Vince Cable has accused the government of lacking “a compelling vision of where the country is heading beyond sorting out the fiscal mess”. 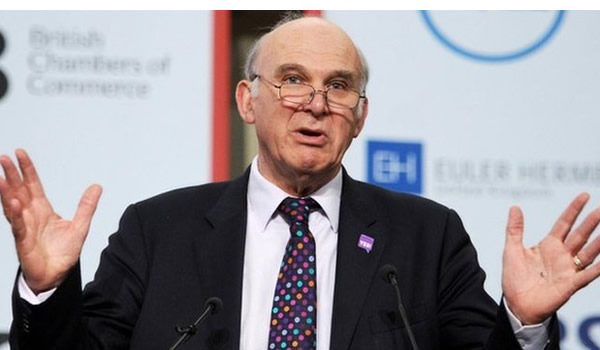 Business secretary Vince Cable has accused the government of lacking “a compelling vision of where the country is heading beyond sorting out the fiscal mess”. He says there is “something important missing” in the coalition’s industrial policy and growth strategy.

His thoughts are revealed in a letter (pdf) to David Cameron and Nick Clegg, leaked to the BBC this afternoon.

He also says the government needs a “clear and confident message about how we will earn our living in the future”, and calls for RBS to be split up and “British business bank” to be set up:

“My suggestion is that we recognise that RBS will not return to the market in its current shape and use its time as ward of state to carve out of it a British Business Bank with a clean balance sheet and a mandate to expand lending rapidly to sound business.

“We should be willing to use such an institution to support our other industrial objectives, such as supporting exports and sectors identified as of strategic importance.”

“Our actions are, frankly, rather piecemeal. There are lots of individual funding decisions that lack support in other policy areas, or are not followed through systematically… There are gaps in the UK innovation system, notably a lack of support for large scale demonstration of new technologies.”

He calls for the government to “be willing to identify British success stories, as identified through success in trade, and explicitly get behind them at the highest political level”, writing:

“We need to plan how to develop a proper strategic partnership that retains capabilities in this country.”

“We need a more strategic and proactive approach using all of the government’s policy levers – rather than simply responding to crises after they have developed or waiting to see what the market dictates.”

Responding to the revelations, the BBC’s business editor Robert Peston, to whom the “brutally frank analysis” was leaked, wrote:

The letter, dated February 8, comes on the day that both Mr Cable and the Labour leader, Ed Miliband, are setting out competing visions for the regeneration of British manufacturing and the British economy.

In a speech this morning to the manufacturers’ lobby group, the EEF, Mr Miliband called for the creation of a “British Investment Bank”, to provide a new source of finance for small and medium size businesses, and for a more active and patriotic industrial policy (see my earlier note).

But although Mr Cable today hailed the decision of Nissan to launch a new model from its Sunderland plant, with the potential to create 2000 new jobs, it is clear from his letter that he has profound concerns about the shortcomings of his own government’s industrial regeneration plans.

What may be seen as extraordinary is that he appears to be criticising in part the work of his own department.

Whether his colleagues, especially his Conservative colleagues, will welcome the implication that the government is the slave of events, rather than the master of them, is questionable.

The letter overshadows the good economic news today from Nissan, which is to create 2,000 new jobs by building its new compact car in Sunderland, and will further enrage the Tory right; for Clegg, though, having the only other Lib Dem Cabinet big beast rattle the Tories once again may be no bad thing for his party’s prospects.

• Is the government finally ‘getting it’ on industrial policy? – Tony Burke and Tim Page, February 28th 2012

• Cable should work with unions, not bully them, for the good of the economy – Mik Sabiers, June 8th 2011

20 Responses to “Cable: Coalition lacks “a compelling vision of where the country is heading””