Scotland’s battle with the bottle took an historic step forward yesterday as MSPs gave initial approval for the SNP’s plans for a minimum price for alcohol.

Scotland’s battle with the bottle took an historic step forward yesterday as MSPs gave initial approval for the SNP’s plans for a minimum price for alcohol. 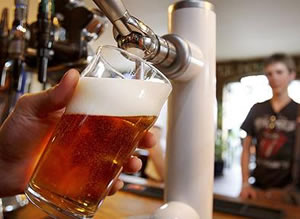 Urging members to support the legislation at stage one debate, health secretary Nicola Sturgeon, whilst admitting the measure would not be a magic bullet that would, on its own, solve Scotland’s alcohol problem, argued it was:

“…essential if we are to make a significant contribution to reducing consumption.”

According to Alcohol Focus Scotland, during the lifetime of the Scottish Parliament 22,680 people have suffered from alcohol-related deaths in Scotland, a sign of it having the highest levels of consumption and alcohol harm of any region in the UK.

“This is the equivalent of every person over the age of 16 drinking 119 bottles of wine.”

It is estimated also that alcohol misuse costs the Scottish economy £3.5 billion every year with an estimated 1.4 million GP consultations every year having alcohol as a factor.

The plans were approved in principle by 86 votes to nil, with 32 abstentions, and came as the Scottish Conservatives last week dropped their outright opposition to the measure after it persuaded the SNP to include a sunset clause within the legislation for the policy to be reviewed in five years’ time.

For Scottish Labour, meanwhile – which abstained from the vote – public health spokesman Dr Richard Simpson outlined the party’s own 14-point plan (pdf) to tackle alcohol misuse including proposals to cut the level of caffeine allowed in alcoholic drinks, a measure which could outlaw completely Buckfast tonic wine in its current form.

“There are members in all political parties determined to tackle Scotland’s drink problem, but if we are to be successful we need to acknowledge there is no quick fix, silver bullet or one-size-fits-all solution.

“This is a complex problem that demands a wide-ranging response. That is why Scottish Labour is launching not just one idea – but a comprehensive package of measures that we believe will help tackle Scotland’s problem with drink.

“By contrast, the SNP minimum unit pricing bill has come up with a single proposal which will hand a multi-million pound windfall each year to big retailers and not provide a single penny more for police or our NHS.

“Regardless of your view on the government’s bill, we recognise that a much more comprehensive approach is required to bring about the much needed culture shift we all want to see.

“If we work constructively together we believe we can put in place a broad range of fair, workable and effective measures. That way we can change Scotland’s relationship with alcohol not just for the better, but for good.”

The developments north of the border are likely to be watched with interest in Downing Street after David Cameron’s strong hint last month that he wanted to see the introduction to a minimum price across England.