Jos Bell presents eyewitness sketches from both Houses on the final passing through Parliament of the health and social care bill this week.

Fast forward 66 years, and on Tuesday, March 20th, 2012, the Queen came to Westminster to mark her Diamond Jubilee; later the same day, the coalition government, despite mass opposition from all of those who care about and understand the workings of Bevan’s NHS, succeeded in their drive to overturn this most successful model of free at the point of need healthcare – the universally owned jewel in Her Majesty’s crown. 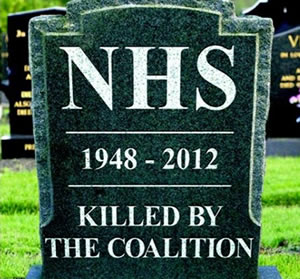 Right up until the final minute of 11th hour, there were last ditch attempts to put the Lansley Bill on hold – from the shadow teams in both Houses as well as by NHS champion Lord Owen.

They could not have fought harder to bring the truth of the bill to the general public and to save our NHS.

On Monday, the Lords held their Third Reading – which would see two attempts to put the bill on hold, as well as debates on key amendments which had yet to be resolved.

Presumably in a bid not to appear too triumphant in anticipation, the Earl Howe had opted for his usual Colonel Mustard shaded tie:

It would be hoped that after an epic 25 days of debate on the bill in the Chamber that all present had a better notion of what they were voting for than this particular Conservative noble.

The Tory grandees were there in force as were seldom seen Lords of the Crossbenches – and just in case Leon, Ken and the Normans felt like bursting into song to mark the occasion, Lord Lloyd-Webber was on hand in the lobby queue, no doubt with a Phantom of the NHS manuscript at the ready in his pocket.

Lord Owen, meanwhile, acquitted himself both with dignity and thoughtfulness as he presented the 38 Degrees petition at the start of the debate, to accompany his well reasoned argument that the bill be with held until the now infamous Transitional Risk Register be released.

• Lucas: “Dismantle this reckless ideology – before it can cause irreparable harm” 19 Mar 2012

Within the most complex of scenarios the reasons were simple:

“My premise and my plea to the House is that, before making a final decision, all those who respect freedom of information and the world that we now live in with a viable Freedom of Information Act should at least await the decision of Professor Angel and the tribunal.

The dark angel cudgel blows came from uber-right Baroness Murphy who caused outrage by implying the Information Commissioner was acting for political reasons and from surprise intervention from the usually absent Lord Birt – who emerged from his extra-terrestrial hinterland as if a malevolent ET to condemn the release of anything containing the R word.

Former head of the Civil Service Lord Wilson raged that civil servants would never again be able to offer an iota of advice save in secret-squirrel code. As Lady Thornton said, did they not think the Information Commissioner had considered all these points before making his decision?

Unusually, Earl Howe was far off the mark in his response – presumably because there is no reasoned argument for constitutional abuse.

Although in the greater scheme of things 25 days is not a lengthy time, in terms of Lords debates it is remarkable. Not noted for his patience, Lord Walton had clearly had quite enough and at almost 90 who could really blame him. As a Crossbencher, along with Baroness Finlay and Lord Patel and Warner he had put forward numerous amendments (and for every one debated comes with it a full and detailed speech).

He reminded the House that whilst a practising neurologist he had once noted Lord Owen, a full generation younger than him, as an outstandingly promising trainee at St Thomas’s. For him the bill was “better2 and Lord Owen’s action unhelpful. It was as if he saw his former pupil as some kind of conscientious objector.

Yes war is bad and kills people but sometimes you just have to capitulate and join in. At that moment it was clear all would be lost.

With the Lords rejecting Lord Owen’s final rescue overture, the following day in the Commons, Andy Burnham succeeded yet again in calling another emergency debate, squeezed in just before the allocated four hours (max) to discuss the 374 amendments which had come back from the Lords.

Reading out the clause from the government’s own website:

“Government will make available its assessments of risks that affect the public, how it has reached its decisions, and how it will handle the risk. It will also do so where the development of new policies poses a potential risk to the public.”

…he made it clear their duty lies in telling the truth.

Yet again, avoiding this duty of care, the government chose to focus their arguments on the erroneous red herring of the n/a Strategic Risk Register instead of the Transitional Risk Register case in point.

Yet again the opposition, with the assistance of Andrew George and John Pugh, railed at the myriad ‘myths’ which Andy Burnham again and again cited, supported in wit and wisdom by John Healey and Grahame Morris; yet again the government kept their majority willing to flout the law – two parties against one.

Back in the Lords there had been last minute rescues and last minute losses. Whilst the urgent need to rescue Public Health England from the brink of becoming a danger to the public was recognised, the Lords rejected the compulsory registration of care workers which would have protected the sick and the elderly.

After much heart searching Baroness Thornton broke with the traditional mollifying end to Lords debate and made her own final heroic attempt to save the NHS:

“This House declines to allow the bill to pass, because:

The bill does not command the support of patients who depend on the National Health Service, the professionals who are expected to make it work, or the public;

Will not deliver the promised objectives of genuinely empowering clinicians in the commissioning process and putting patients at the heart of the system;

Will increase bureaucracy and fragment commissioning; will allow foundation trusts to raise up to half their income from private patients;

And, despite amendment, still creates an economic regulator and regime which will lead to the fragmentation and marketisation of the National Health Service and threaten its ethos and purpose.”

Up sprang Dame Elizabeth Butler-Sloss – though admitting she had never taken part in any of the previous days of debate – to thunder that if Baroness Thornton’s vote was carried the government could still implement the bill, but without any of the Lords amendments.

Had she failed to notice they had done that anyway with their noble welfare reform amendments? Albeit they had been vigorously opposed at every turn by Freud whereas Earl Freddie is seemingly everyone’s favourite Tory.

The consensus being, as Lady Thornton and Lady Finlay said, that “the government owes him an eternal debt of gratitude” for his endless patience and “willingness to engage with all queries and questions at any time of the day or night”.

Ironically it is seemingly Howe who has rescued the bill from the brink by being willing to engage with amendments in the way his Commons compadres had not. However whatever Freddie’s fond hope, despite the many changes it continues to be a very bad bill indeed. Yet the majority of Lords voted it through.

“This is a betrayal of public trust and an appalling waste of public funds.”

Towards the end of the Commons debate, in one of her finest Parliamentary contributions, shadow social care minister Liz Kendall was moved to read out a summary of the bill impact from Malcolm Alexander, chair of the soon to be defunct Association of LINks Members, and the 67 last minute detrimental changes to the role of Healthwatch steamrollered through in the Lords by Baroness Northover without any notice or consultation.

So much for ‘nothing about me without me’. The promise of patient empowerment had been ‘no more than a slogan’ which gave the public false promise. As former shadow health secretary John Healey said, all they are left with is “the power to write a letter to the local authority, who isn’t even responsible for the provision”.

Moreover, Ms Kendall also had the whistleblower surprise of the day at the ready – one which seemingly sent minister Paul Burstow fleeing from the chamber. Deep from within the Department of Health, a staffer clearly at the end of their tether had sent her an enlightening email containing the government’s own damning internal risk assessment of the reduced role of Healthwatch. A final escapee from the government maze of misrepresentation.

In mockery of Andrew Lansley and David Cameron’s constant assertions that it was all to the good to improve a broken service, patients it is clear will instead be put in needless danger. The truth was finally out.

Then it was all over. The final vote. Despite all the evidence to the contrary this bill of “poor judgements” is now law.

In imitation of the government’s methodology, Burns had bulldozed his way through his amendments as if he couldn’t wait to escape, whilst Burstow finally returned to the chamber when called to account by his opposite number. Seemingly, despite the earlier Cabinet table banging, they were not in a comfortable place.

Lansley, meanwhile, pulled a series of idiosyncratic facial shapes then clearly not knowing where to hide when David Anderson read out the Michael Rosen poem in an earthy Blaydon lilt:

“These are the hands

That touch us first

And make your bed.

These are the hands

That tap your back

These are the hands

That fill the bath

Give us a jab

And these are the hands

That stop the leaks

And touch us last.”

“When the election comes, they will be thrown out where they belong.”

In the Lords, Baroness Joan Bakewell had also observed afterwards “it will lose them the next election”.  A cross-Houses consensus reaching beyond the contradictory tortures of the LaLa bill.

A glance across to the pushmepullyou Liberal Democrats shows there is every chance they will be lost without trace. As the public start to experience the new Fragmented Health Service, they will indeed never forget.

Andy Burnham has pledged that if he is once against health secretary he will repeal the Act.

All we can do is hold onto the hope that this will be feasible – and as both the shadow teams and many a medic are saying  – keep on fighting!

“We have given this fight everything that we had. All I can say is our fight will go on to protect and restore this party’s finest achievement.” – Andy Burnham, 20/03/12, the day the NHS stood still