Ken Livingstone today vowed to “ease the squeeze” on Londoners, pledging to addressing the biggest the rising cost of living which is squeezing millions.

Ken Livingstone today pledged to “directly address the biggest the rising cost of living which is squeezing millions of Londoners” as he stepped up his campaign for London Mayor.

He said the election in seven weeks’ time was “not the X-Factor or a soap opera but a deadly serious choice about who will put the majority first”, with Labour leader Ed Miliband, alongside Ken for his pledge launch, describing the poll as “a referendum on Boris Johnson’s fares policy”. 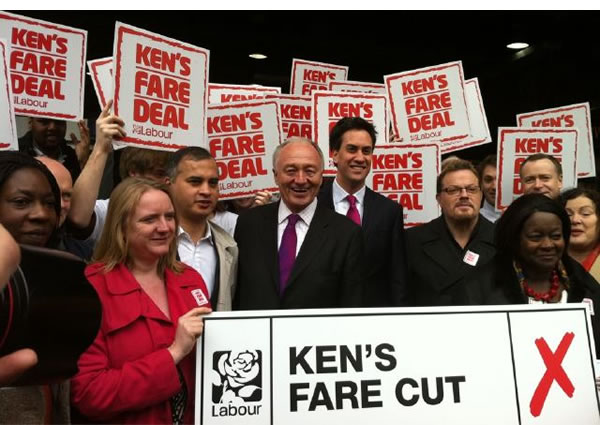 His “key commitments to Londoners” are:

2. Boris Johnson has admitted cutting 1,700 police officers. If I am elected, I will reverse his cuts. And I will reinstate sergeants to all 600 Safer Neighbourhood Teams, more of which will be beefed up to a minimum of nine officers.

3. I will establish an all-London non-profit making lettings agency which, by cutting out Estate Agents’ profit, will help reduce rents and provide secure tenancies, and I will campaign for a London Living Rent – no Londoner should pay more than a third of their income in rent.

4. I will enable London households to save over £150 a year on energy bills through taking up money from energy companies for better insulation, which Boris Johnson has failed to do – losing London £400m – and bringing in bulk purchasing deals to cut the price paid by Londoners for electricity and gas.

5. After the Tory-led government’s abolition of EMA I am committed to restoring a London-wide Educational Maintenance Allowance of up to £30 per week in term by bringing together existing funds in colleges, universities, and local authorities.

6. I will help families with the upfront cost of childcare through offering grants of up to £700 to low income families and interest-free loans to families earning up to £40,000 per year. I will campaign against the Tory cuts to childcare tax credits and provide funding to create more out-of-hours childcare places at 200 nurseries across London.

“Over a four-year term my Fare Deal will save average London fare-payers £1,000, participating London households will save over £600 in reduced energy bills. Downward pressure on rents will be maximised.

“Families with children receiving EMA can get over £1,000 a year per student. We will work to help families struggling with childcare costs.”

Yesterday on Left Foot Forward, we showed precisely how the fare deal works, taking apart Boris Johnson’s claims that they are uncosted and unsustainable.

“At the very core of this election is an unbridgeable difference over fares – Ken will cut the fares, Boris Johnson has raised them above inflation every year in the toughest possible times.

“That’s why the London Mayoral Election is a referendum on Boris Johnson’s fares policy and a huge opportunity to put in place a positive agenda for the future of the capital.”

“This election is not the X-Factor or a soap opera but a deadly serious choice about who will put the majority first, and with years of rising fares in very tough times the question of reducing the squeeze on Londoners’ living standards has become the central issue.

“Our Labour campaign is reaching out to Londoners in every part of the capital and from every background and political opinion who want a fairer deal. Residents in outer London have been betrayed, in many cases hit hardest by soaring fare rises and cuts to the police. I will put that right…

“My key pledges will help millions of Londoners from the commuters who are being hit by Boris Johnson’s bus, tube and train fare increases, to the families struggling with the cost of childcare, to the young people who can’t afford to stay on in college.”

17 Responses to “Ken vows to “ease the squeeze”, saying Boris has “betrayed” Londoners”