On budget day, Richard Darlington, head of news at the Institute for Public Policy Research (IPPR), presents a detailed breakdown of the benefits bill.

George Osborne is hoping to make one thing crystal clear: what your taxes are spent on.

You have to look really hard at the pie chart release by the Treasury to even notice the overseas aid budget, but the welfare bill hits you full in the face. Every taxpayer will welcome such transparency. But what the new personal tax statements won’t do is breakdown the big piece of the pie chart called ‘welfare’.

So in case you were wondering, here is what your personal tax statement could have shown you, if it did: 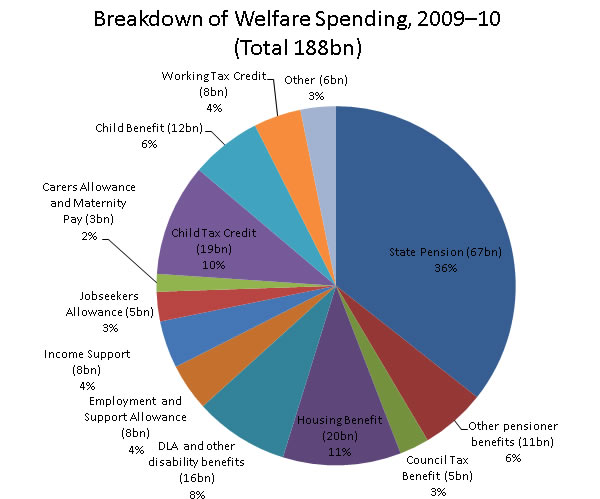 That’s right, two-fifths (42%) of welfare spending goes on pensioners: a whooping £77bn in total. And more than 15% – £31bn – goes on children, via child benefit and the child tax credit. That’s almost £6 out of every £10 of welfare spending accounted for and, so far, not a “scrounger” in sight.

Then we’ve got another 10% going on support for disabled people – and this should not be confused with incapacity benefit, now called employment and support allowance, or ESA. A further 5% goes to carers and boosting the incomes of the working poor.

Only a shade over a 10th of the benefits bill – and a far smaller share of total public spending – is actually spent on directly replacing the incomes of those not in work, through jobseeker’s allowance, income support and ESA (£21bn in total). The remaining large items of spending are council tax benefit (£5bn) and housing benefit (£20bn).

• “According to my tax breakdown, Daily Mail readers are the biggest scroungers” 20 Mar 2012

But these reform issues must be addressed on the basis of facts and proper transparency would be a good start.

43 Responses to “Budget 2012: Breaking down the benefits bill”