The Bank of England is blind to the financialisation of commodities, explains Cormac Hollingsworth.

“At its heart, the regulatory failure of the global financial crisis was not a failure of one approach to the institutions of regulation, but a failure of understanding and risk assessment which covered central bankers, regulators and Treasuries throughout the world.” – So said shadow chancellor Ed Balls in the debate on the major reform of our financial system, the Financial Services Bill. 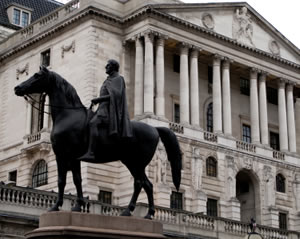 But there is little sign of this experience and insight being reflected in the bill, which is passing through Parliament with the speed of a high frequency trader causing a 10% collapse in the stock market.

The reason it is Parliament’s, and not the regulator’s, job to make these decisions is because (Ed Balls again):

“The buck does not stop with the Governor of the Bank of England, but with the Chancellor of the Exchequer, who, in the end, is the guarantor of the public purse and taxpayers’ money, and of the wider stability of the system.”

His concerns are broadly felt.

The CBI is worried (pdf) there is an absence of guidance:

“…in a way that is consistent with promoting the medium and long-term growth of the economy.”

“…the legislation underpinning the Financial Policy Committee should specify that its objective is to maintain a sustainable supply of credit to the economy.”

“…at the moment the bill is drafted too broadly to be effective in encouraging proportional executive pay.”

But this has not been a bi-partisan bill. Every amendment to the bill has been voted down.

One particular amendment’s defeat should cause great concern, and was argued for by the Shadow Financial Secretary to the Treasury, Chris Leslie, last week:

“If the bill is to make our regulators fit for the 21st century, we need to give them a proper map or toolkit relating to the risks and where they are concentrated in our financial system.

“The Americans have begun that process; we need to ensure that the Bank of England has a data centre to match those capabilities.

“To do that in the UK would require the creation of standardised databases of counterparties and financial instruments; reports could then be made to the Bank of England’s data centre in real time, as and when each transaction takes place.

“The value of standardised databases to the City, not only the regulators, should not be underestimated. They would facilitate a much better consolidation of risk management within firms, and allow further, much-needed innovation.

“That knowledge is surely essential not only for the regulator, but for banking executives.”

In voting the amendment down, once again the government failed to give the super-regulator the mandate it needs to make a major change in how financial data is collected in the UK. There is now nothing to stop the overweening lobbying power of finance in blocking any change.

Highlighting the need for this reform next week will be fellow Labour and Co-op MP Chris Evans in a ten-minute rule bill. Chris Evans’s bill has been seen by Left Foot Forward and it includes important extensions to improving the transparency of the UK’s commodities markets, to make public for the first time the true level of risk taking.

Unlike in the American markets, where the level of participation by speculators, financial investors and commercial players has long been publicly available from the US regulator, this information is not available in the UK. And there are reasons to be concerned.

According to the IMF, since 2006 pension funds globally have doubled the proportion of their portfolios invested in commodities. These are long-term investments, not the speculations that come to mind when we think of jacket-wearing oil futures jobbers. And they’re big.

The latest estimate is that there is half a trillion dollars long-term pension money invested in commodities. These investments are not direct, but facilitated by a financial innovation, the Commodity Index Fund, invented by Goldman Sachs in the 1990s using the same financial technology of swaps that gave us the synthetic CDOs that sold sub-prime mortgages round the world.

Goldman marketed the commodity funds as a diversification for pension funds looking to hedge against inflation or equity market risk, and offered to manage the risk of a complex portfolio of futures in return for a fee.

In a leak to Vermont Senator Bernie Sanders, released on his website, disclosed the confidential information held by the Commission Futures and Trading Commission of the positions in oil during the 2008 spike, and which institutions held the biggest positions.

Vitol is one of the world’s largest traders of oil, and one would have expected them to be the top trader in the American oil markets. It wasn’t. The largest trader was… Goldman Sachs.

BP you might expect to have large positions in the oil market, but it comes in only in 14th place. The UK’s leading hedge fund, Brevan Howard, was19th on the list. Ahead of them were Morgan Stanley, Barclays, Deutsche Bank, JP Morgan, Lehman, Societe Generale, Merrill Lynch… well, you get the picture.

Each one of these banks has a commodity index fund operation. Just like banks used to take deposits and then lend that money to companies, now these banks acquire commodity futures, and then pass on the returns to their investors in the form of simple commodity swaps. This is a sure bet for the banks as they take no risk, take a fee and pass on the risks to their customers.

Recent commodity price rises in the UK mean we need similar information here. For example, why is it that for the past year, UK oil prices – the Brent oil price – has been 10.7p a litre higher than the equivalent American traded oil price?

Because the FSA doesn’t receive the information that is available in America, we can’t be sure if this enormous squeeze on UK consumers and businesses was because of a shift of commodity index funds into the UK market. They may have been seeking to avoid EU and US regulation after feeling reassured by Lord Turner’s (£) attack on the moves by the EU and US regulators to impose position limits on commodity speculation.

It’s not just oil that’s affected here; according to Better Markets, the presence of Commodity Index Funds has switched the balance in all commodity markets, even food. Chris Evans’s point is that it’s time we found out, and that’s why he deserves our support.