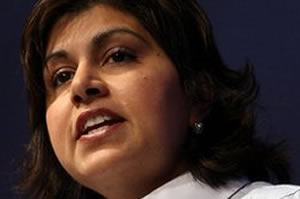 The Conservative Party co-chair, Baroness Warsi, will today deliver a speech at the Vatican in which she will warn that religion in the UK is being:

“Sidelined, marginalised and downgraded in the public sphere.”

Leading a delegation of Ministers on a two day visit to mark the 30th anniversary of the establishment of full diplomatic ties between the UK and the Vatican, Warsi will deliver her speech against a growing sense of unease at a growing marginalisation of faith in general and Christianity in particular, following last week’s ruling by the High Court outlawing the centuries-old tradition of formal prayers being said at the start of local council meetings across the country.

Previewing her speech, Warsi today writes in the Telegraph:

My fear today is that a militant secularisation is taking hold of our societies. We see it in any number of things: when signs of religion cannot be displayed or worn in government buildings; when states won’t fund faith schools; and where religion is sidelined, marginalised and downgraded in the public sphere.

For me, one of the most worrying aspects about this militant secularisation is that at its core and in its instincts it is deeply intolerant. It demonstrates similar traits to totalitarian regimes – denying people the right to a religious identity because they were frightened of the concept of multiple identities.

Will be arguing for Europe to become more confident and more comfortable in its Christianity. The point is this: the societies we live in, the cultures we have created, the values we hold and the things we fight for all stem from centuries of discussion, dissent and belief in Christianity.

These values shine through our politics, our public life, our culture, our economics, our language and our architecture. And, as I will say today, you cannot and should not extract these Christian foundations from the evolution of our nations any more than you can or should erase the spires from our landscapes.

Her remarks echo those of the former Archbishop of Canterbury, Lord Carey, who on Saturday used an interview on the Today programme to warn of the marginalisation of Christians in British society and, following David Cameron’s call last year, to encourage Britons to“actively stand up and defend” our Christian values.

For those that now advocate a diminished role for Christianity within our society, the argument goes that we shouldn’t “impose” religion on those who do not want it.

I would agree – forcing religion on anyone achieves nothing other than building resentment. However, to deny, as some now seem to be pushing, the role of Christianity within public life would be to deny a voice to the very faith that has provided the bedrock of our morals, ethics and values as argued by David Cameron.

But at its heart is an issue of hope. As a nation our hopes and aspirations were so often intrinsically linked to the pursuit of money. The recession and subsequent economic collapse proved that hoarding wealth provides little more than temporary comfort and is itself a corrosive force within society as personal greed has too often dominated.

With families struggling with the prospects of unemployment, losing benefits and poverty, fighting for the right of Christians to remain very firmly at the top table of British life is about ensuring that a message of hope can be heard loud and clear in an increasingly hopeless world.

I take as an example my own circumstances.

I have suffered on/off with anxiety problems. Some days and weeks things are ok, others it can be difficult to figure out what I’m getting anxious about. But the comfort and support I have had from my family at church has been overwhelming.

The love they show based not on them wanting to do good deeds to gain brownie points with God, but on the message within the book of Mark to “Love your neighbour as yourself” has been humbling.

In a society in which admitting weakness can all too often be looked down on and dismissed as essentially crazy, the comfort of having a Christian family in which it is possible to open up when things aren’t going to well is such a comfort, in a way that a secular world has difficulty showing. It is a love unlike any other and one we cannot allow to be marginalised.

Dear Child of God, I write these words because we all experience sadness, we all come at times to despair, and we all lose hope that the suffering in our lives and in our world will never end.

I want to share with you my faith and my understanding that this suffering can be transformed and redeemed. There is no such thing as a totally hopeless case.

Our God is an expert at dealing with chaos, with brokenness, with all the worst that we can imagine. God created order out of disorder, cosmos out of chaos, and God can do so always, can do so now — in our personal lives and in our lives as nations, globally.

The most unlikely person, the most improbable situation — these are all ‘transfigurable’ — they can be turned into their glorious opposites. Indeed, God is transforming the world now — through us — because God loves us.

In a world and society of increasing despair, how often can we say that the “secular world” provides a beacon of hope and love in such a way as the Christian faith declares? We cannot allow the Christian message of hope to be snubbed out from our public life.

• As order breaks down in Syria, its Christians suffer the consequences – Ed Jacobs, February 7th 2012

24 Responses to “We need to defend the hope at the heart of Christianity, not fight militant secularisation”