Cormac Hollingsworth explains how the warning signs for Barclays’s tax-dodging were there back in 2008. 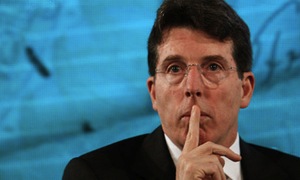 “The occupy protest against corporate greed in London was disbanded on the day Barclays were revealed to have used a loophole to avoid paying £500 million tax.”

Cormac Hollingsworth explains the background behind the Barclays deal…

Bob Diamond’s Barclays Bank has been caught by the UK tax man trying to help two clients avoid tax on half a billion pounds, it was revealed by the FT yesterday (£).

The tax authorities described the schemes as “highly abusive” and HMRC are changing the law to close the loopholes exposed.

Bob Diamond, the man who a year ago told the Treasury Select Committee that “the time for banker remorse is over,” is clearly taking this beyond the boundaries of acceptability.

As Richard Murphy has blogged last night, Barclays had signed a code of conduct on taxation that these transactions explicitly looked to dodge.

But the warnings were there, back in the financial crisis.

Barclays shareholders were up in arms at the deal that Bob Diamond cut with the Qatari and Abu Dhabi states that bailed out Barclays bank to the order of £7 billion. The deal paid 14 per cent, while a comparable deal from the UK government was a 12 per cent coupon (for example, that’s what RBS had to pay).

There had to be a reason why Barclays board preferred to pay the higher coupon to avoid the UK becoming its shareholder, and that reason is now clear. With the UK government as their shareholder, their highly abusive tax deals would have been stopped.