The USA is about to have a lower public debt than the UK, for the first time; Cormac Hollingsworth looks at why that may have happened. 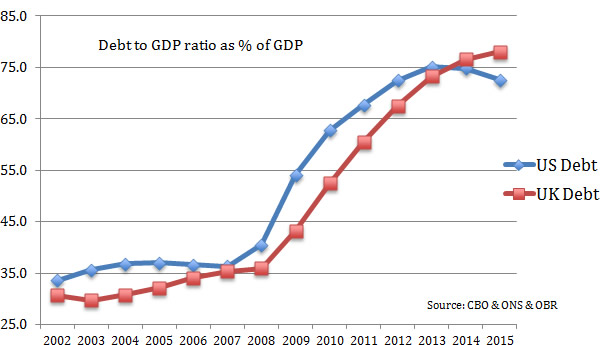 Now, the coalition’s contractionary policies mean that that record will hold no longer: the UK is about to have a higher debt than the recently downgraded US.

The Congressional Budget Office (CBO) – the equivalent of our Office of Budget Responsibility (OBR) – last night published its forecast that the US deficit would fall by a massive two per cent of GDP to seven per cent of GDP this year. Here in the UK we’re hoping that the OBR is right that the stagnating UK’s deficit shrink by a fraction of that, 0.8 per cent, if at all.

But even worse for the coalition, given that the US’s recent credit rating cut, the CBO is predicting that the US’s borrowing will start falling rapidly through the next few years as the US economy continues to grow.

As we’ve been saying, this is all policy driven, and once again this emphasises our point.

Unlike Obama’s insistence to continue the stimulus, the coalition promised in June 2010 that even though they were about to savagely cut spending and undermine demand, debt would peak in 2014. That peak has been postponed a year to 2015 in the most recent OBR forecast.

As the peak in UK debt disappears into the future and the peak in US debt is brought nearer by its accelerating growth, one wonders what S&P will do.