The Fabian Society’s James Hallwood argues for a worldwide responsibility for liberal intervention. 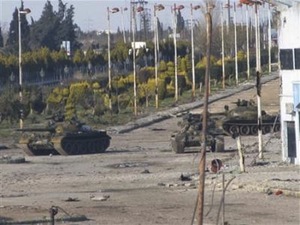 Syrians are facing an onslaught from their own government, yet the West is unwilling, and realistically unable, to help.

Almost ten years after the invasion of Iraq our squares and embassies are witness to protestors asking for intervention not decrying it, people shocked at our government’s inaction not action.

But in a post-Iraq age the ‘policing’ of the world must be a shared burden – one that relies less on western foreign policy as well as the blood of western soliders – a burden that emerging and regional powers must step up to.

The expectation that intervention should be a western decision, or western led, must be abandoned. For every potential Iraq there is a Rwanda: Often the West is damned if it does and damned if it doesn’t. The guilt of inaction cannot be ours alone. Nor can the monopoly on humanitarian action be used to justify our own agenda.

The fallout from Iraq has severely dented the ability of the West to intervene where it is needed, not least because of the question of motive. Questions surrounding the reasons for our entry into Iraq continue to be raised in opposition to every intervention mooted since.

A more multilateral approach as epitomised by the UN sanctioned action in Libya suggests a new model for intervention. The situation must be bordering on calamity; there must be wide support internationally, regionally and internally; and a long-term occupation is not an option. Intervention should not be embarked upon lightly.

Nevertheless, even with such legitimacy the West’s involvement in Libya’s civil war was not without controversy.

Eleven years into the occupation of Afghanistan, the British and American public have grown war-weary, tired of the human cost on all sides, and, in a time of economic difficulty, ever conscious of the price tag attached to military action. Even with Benghazi facing an outright massacre, Britons were severely divided on the merits of intervention.

With entrenchment in Afghanistan, cuts in military spending and forces spread thinly the West lacks not only the willpower, but also the military power to always assist those in need.

If it’s unpopular at home, it can be more so abroad. With the civilian cost of Iraq and Afghanistan, the disgusting abuses and crimes committed by the few, and the perenial charge of ‘imperialism’ the West is often at risk of inflaming opinion against legitimate interventions.

The West suffers from contrasting traits of arrogance and moral obligation. When a crisis emerges we think ‘should we, or should we not intervene’, but never consider what the rest of the world should do.

So used to being the policeman of the world, we bear the financial and human cost of war or turn our own policy objectives into world policing with disregard to international opinion and real humanitarian need. Liberal intervention must be seen as entirely separate to western foreign policy.

Syria presents the ideal opportunity for the West to step back while other countries should step up. Our intervention there would undoubtedly inflame the situation. Almost every factor counts against American or European action. From geographic distance to geo-politics – western entry could escalate a civil war into an international one.

Turkey is in an ideal position to broker peace, and if necessary intervene. There is a moral case that other countries, particularly the emerging powers start to take their share of responsibility in a century where they will grow in economic and political significance.

As nations like Brazil and India grow in power they must realise that splendid isolation cannot be an option. The West must let go of the reins just as much as the newer powers must stop assuming that we alone can intervene. As they push for Security Council recognition they must themselves recognise the need to pitch-in, perhaps far more sucessfully than we could ever do.

Intervention isnt always the answer, but when it is we must let go of the presumption that the West alone can act, for right or wrong. The blame for lack of intervention cannot be solely put on us when there are democratic military powers around the globe who also refuse to act.

A more pluralist, multilateral model of intervention – preferably under the aegis of the United Nations is a healthier approach to the humanitarian problems of the twenty-first century.  The West shouldn’t, and can’t always intervene, but that doesn’t mean that there should be no intervention at all.

It’s time for us to step back and let the other powers of the world step up.

• Amidst the burning flesh of Homs, Syrians plead: “We are getting slaughtered, save us” – Shamik Das, February 7th 2012