Guy Shrubsole shows the Spectator how to do real environmental journalism. Hint: It's not the way they do it. 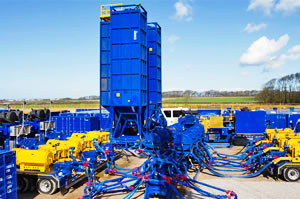 Another week, another blast of hot air from Britain’s small coterie of ‘alternative energy’ fantasists.

I’m not talking about environmentalists here – who have been advocating truly alternative energy, in the form of clean and renewable power, for decades. I’m referring to the new breed of advocates, for a very old form of fossil fuel.

They are the shale gas lobby, and the ardour with which they tout their product is matched only by the myths they tell to promote it and discredit renewables.

On Friday the Spectator published a full-length editorial in support of shale gas, which gave the impression that Britain is a land overflowing with milk, honey and shale gas, and that it’s just those pesky greens stopping us from exploiting the bounty.

The Spectator claimed that:

“Britain’s recoverable reserves are estimated at 20 trillion cubic feet, which will produce perhaps enough energy for the next 100 years.”

The quoted volume of gas is agreed upon by the US Energy Information Administration, but at current rates of gas use the UK would burn through this quantity in just 5.6 years – somewhat shy of the Spectator’s ‘shale of the century’ dream.

Meanwhile, the Spectator’s editors are deluded about the nature of the environmental crisis.

They seem to imagine that all those who care about the future of the planet yearn for less energy (“The energy-scarce world of [environmentalists’] dreams has been put off for a couple of centuries at least… There may be no energy crisis after all.”) But energy scarcity has never been the problem.

Regardless of whether world oil production has peaked or not yet, there’s no question that we have far more fossil fuels than we need to thoroughly trash the climate. The real problem is transitioning to carbon-free power fast enough to avoid climate destabilisation.

And shale gas, despite the blithe assurances of the Spectator that it is “not at odds with carbon reduction policies”, is not going to help here.

The reason why is a simple calculation. How much space is there in the UK’s remaining ‘carbon budget’ to allow for an expansion in our use of shale gas?

Let’s leave aside the highly questionable assertion made by the Spectator that shale gas has a carbon footprint half that of coal – as peer-reviewed studies and shale well monitoring strongly suggests, the methane leakage from drilling for shale scuppers its claims to be a relatively clean fuel.

But let’s assume that shale gas has the same carbon footprint as conventional gas – and as Green Alliance has carefully shown, there’s still no room for more of it in our energy mix. We already had a dash for gas in the 1990s and have pocketed most of the emissions savings that can be had from simple fuel-switching.

On nuclear and CCS the Spectator is silent; but it has decided to fix its baleful eye upon renewables, and direct its ire at the cheapest, most efficient and most abundant form of renewable energy we currently have in the UK – wind power.

It complains that wind power cannot possibly match its (erroneous) claims for shale gas and provide the UK with enough power for the next century – despite the fact that the UK has more than enough wind blowing across its landscapes and over its territorial waters to make us a net exporter of electricity.

It moans that renewables are heavily subsidised, unlike shale gas exploration – omitting to mention the huge public subsidies and tax breaks that oil, coal and gas extraction receives worldwide.

Still, in fairness to the Spectator, they are not alone in spouting myths about wind.

In this they have been recently joined by Sir Simon Jenkins, chairman of the National Trust, who in an outburst yesterday stated that wind power was one of the “least efficient” forms of renewable energy.

Jenkins is showing himself to be energy illiterate: modern wind turbines are very efficient at converting gusts of wind into electrical energy. He may mean that wind power is variable – it doesn’t generate at a consistent rate – but as the National Grid has stated, dealing with large quantities of variable supply is well within the ken of modern engineering.

Jenkins’ statements come hot on the heels of a letter signed by 100 Conservative MPs calling on David Cameron to cut subsidies for onshore wind power, reduce household bills as a result, and give the cash to develop “other types of renewable energy production” instead.

In this, the honourable members showed themselves to be economically illiterate: onshore wind is the cheapest form of renewable energy around, and whilst I’m all for developing more predictable sources like tidal and wave power, they aren’t going to supply more than a fraction of our energy needs any time soon.

The economic crisis has helped to push the climate crisis down the political agenda – and rekindled fears about fuel poverty and rising energy costs.

But a sustainable and equitable solution to our energy problem isn’t going to come from the shale gas fantastists and wind sceptics. It’s going to come from investing in our nascent renewables industry and taking advantage of a natural resource we have in abundance – wind power.

And if the Spectator, Jenkins and Conservative MPs want a real villain to blame for rising energy bills, they should stop tilting at windmills, and join the growing alliance – now spanning the Daily Mail to green activists and progressive campaigners – that is calling out the profiteering of the Big Six energy companies.