Kate Hudson, general secretary of CND, reports that the MoD have made no contingency plans as to what to do with Trident in the event of independence. 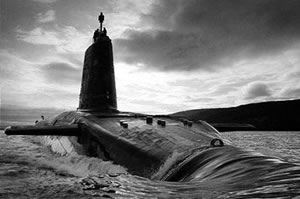 If Scotland opts for independence, Britain’s nuclear weapons will be evicted. You might think the government would be alarmed at this prospect, especially as a new report shows that there actually isn’t anywhere else suitable for them to go, writes Kate Hudson, general secretary of the Campaign for Nuclear Disarmament (CND)

But not a bit of it. Instead, it’s going for that old favourite – the ‘head in the sand’ approach.

Yesterday junior defence minister Peter Luff responded to a volley of questions from concerned MPs about the MoD’s contingency plans in the event of Scottish independence.

Quite unbelievably, this is what Mr Luff had to say:

“The Ministry of Defence is not making plans to change the base ports of those classes of submarines currently base-ported at Her Majesty’s Naval Base Clyde. The Department does not therefore hold cost estimates or other information that would relate to such changes.

And that was the whole statement. It’s not often you hear a minister say that his department hasn’t made plans for circumstances which are quite possible. But Mr Luff seems to be letting wishful thinking get out of hand.

• The Scottish National Party (SNP) has a strong record of opposition to accommodating Trident in Scotland, and has vowed to eject it in the event of an independent Scotland under an SNP government.

• While some have suggested that the SNP could strike a deal with Westminster, Alex Salmond responded that:

‘It is inconceivable that an independent nation of 5.25m people would tolerate the continued presence of weapons of mass destruction on its soil.’

• A referendum on Scottish independence is on the cards for 2014.

So, what about those contingency plans?

In fact, alternatives have already been investigated in years gone by when a location was sought for Trident’s predecessor, Polaris. These are outlined in CND’s recent report Trident: Nowhere to Go.

The upshot is that the MoD has nowhere to relocate Trident to. Not without, variously, evacuating villages; buying up and destroying National Trust land; endangering a city with a population of a quarter of a million people, or closing down local industries.

The MoD has acknowledged this, stating:

‘there simply isn’t anywhere else where we can do what we do at Coulport, and without that, there is no deterrent.’

It would be nice to think that the MoD had finally accepted the overwhelming economic, strategic, and now geographic arguments against replacing Trident and wasn’t looking elsewhere because it had come to the logical conclusion to finally scrap Britain’s weapons of mass destruction.

In fact, such a decision would not be totally out of kilter with other aspects of government defence strategy.

The government’s own national security strategy (2010) confirmed that Trident does not have the relevance it had during the Cold War. Senior military figures have described it as ‘completely useless’ and ‘irrelevant except in the context of domestic politics’, and, if the released Cabinet papers of 1981 are any indicator, there are most likely divisions within the Cabinet on whether or not to replace Trident.

Economically, when placed in the context of the largest public sector cuts in British history, the dwarfing expense of Trident is unjustifiable: a £100 billion price tag over its lifecycle.

The MoD itself is suffering – already 58,000 personnel have been cut and, if replaced, Trident will consume 30 per cent of the MoD’s new equipment budget in the 2020s. That’s before we start mentioning the schools, hospitals, libraries and social services which are being dismantled.

The cost of relocating Trident would be another unknown quantity of billions – the figures start to become meaningless – to add to the already snowballing cost.

So let’s hope Peter Luff’s response is actually a simple reflection of the facts, even if he is not yet ready to admit them: Trident is at a dead end, so what’s the point in making contingency plans?

If this is not the case, his response is bizarre and presumptuous. And with his head so far down in the sand, we can scarcely hear him…