Alex Hern reports on the quiet failure by KPMG to release a report which, they claim, makes the case for gas power over wind turbines. 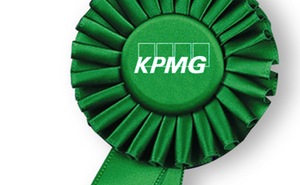 KPMG has refused to release the full findings of a controversial report which claimed that money spent on wind farms would be better used to encourage the building of nuclear or gas plants.

In November last year Reg Platt reported for Left Foot Forward on the preliminary findings of the report:

The Sunday Times and a Panorama edition reported on a yet to be seen report by KPMG (the launch of which has since been delayed and a press release has been pulled) that will apparently make the economic case for gas up to 2020.

Today, BusinessGreen has revealed that KPMG will never release the full study, due to concerns that it is “ripe for misinterpretation”.

Sorrelle Cooper, a spokeswoman for KPMG, told the site that:

“The assumptions and parameters used in the model – which examined the investment and lifetime costs of different energy generation sources – produced large swings in the financial outcomes.”

“To avoid any misinterpretation we have decided not to publish any findings, although we are discussing our analysis with interested clients and stakeholders in the energy industry.”

Cooper admitted there had been mishandling of the release of the report, maintaining that the draft press release had been leaked, although she refused to provide further details on how it had been made public.

However, Cooper stood by KMPG’s methodology, adding that the research team had since come to an agreement with RenewableUK over how the figures were derived.

She also maintained that KPMG had close ties with the green energy industry, was not “anti-wind” and had last week been involved in a major wind farm deal.

But a spokesman from RenewableUK said that while it had met with KPMG since the findings were published, it stood by its original concerns over the report’s methodology.

Regardless of the excuses given by KPMG, it’s hard to take this any other way than them failing to fully support their conclusions, and questions should now be asked of the Sunday Times and Panorama as to why they decided to base stories on an incomplete report in the first place.

The news is a welcome counter to the nimbyism of over one hundred Tory MPs today, who wrote to the prime minister in opposition to wind farms.

As Kevin Meagher argued earlier today on this site:

Wind farms are not to everyone’s visual tastes, but to talk about them ‘destroying the environment’ is so far wide of the mark as to be laughable. By far the most commercially viable form of renewable energy, which can easily be scaled up, wind is vital to Britain’s strategic energy interests.

As Europe’s windiest country, with a suitable onshore topography and hundreds of miles of viable coastline, we would be looking a gift horse in the mouth by not cultivating a free, abundant and truly renewable natural resource.