Alex Hern looks at the accuracy of Andrew Gilligan's attack on Ken Livingstone and finds the answer is somewhere in the middle. 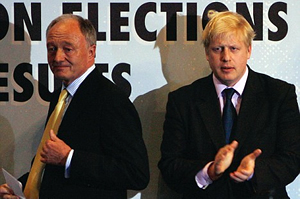 Ken Livingstone’s ‘fare deal’ campaign has been criticised by his old foe Andrew Gilligan today, in what is, depending who you listen to, a devastating attack, a desperate smear, or a fair demonstration of a communication problem in Livingstone’s campaign.

At the risk of spoiling the surprise, we believe it’s the latter.

Gilligan column in the Telegraph relies on some back-of-the-envelope calculations to show that Ken’s claim that his 7 per cent fare cut will save “the average London £1000 pounds over four years” cannot be true.

TfL says Livingstone’s proposed fares cut will cost it £1.12 billion in revenue over the four years of a mayoral term…

There are, conservatively, seven and a half million Londoners. If Ken is telling the truth about our average saving, that is a loss of revenue to TfL of 7.5 million times £1000. In other words, TfL would lose £7.5 billion, not £1.12 billion.

A rather large discrepancy. But at least some of it seems to come from a confusion over what is being compared to what.

TfL’s costings – the £1.12 billion figure – are comparing a plan with a seven per cent fare cut to one with no fare cut, as Channel Four explain:

TfL argues that if Mr Livingstone was to cut fares by seven per cent, the move would reduce the income from fares by £1.12 billion over this parliament. This money is already factored into the budget and if it disappeared it would have to be taken from somewhere else.

But Ken’s costings are comparing his proposed fare cuts to Boris Johnson’s proposed above inflation increases:

Ken’s fare deal will save Londoners £1000… The additional annual cost of Boris Johnson’s inflation-busting fares varies from £260 to nearly £460.

Over 4 years the difference between Ken Livingstone’s fares cuts and Boris Johnson’s above-inflation increases will easily accumulate to over £1,000 on average.

Ken’s fare cuts will save Londoners £1000 over four years compared to the increases of his rival, but that will not equal £250 more in your pocket next year than this year.

Whether this lack of clarity is intentional or not, it does leave Livingstone open to accusations of misleading the public. As Gilligan’s call-out shows, what he seems to be saying is not possible; but what he is actually offering is still worth boasting about.

9 Responses to “Ken v Gilligan: When a thousand pounds is also £150”