Izzy Koksal details the government’s overall plans for workfare, and shows that they have no intention of backing down without a fight. 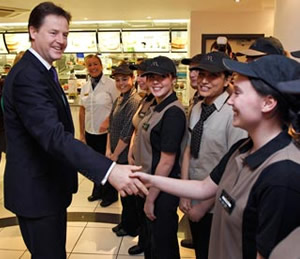 Despite great progress against workfare, the government has more in store for young people; Izzy Koksal investigates the Youth Contract, aka ‘workfare youth’

Workfare is a word the government wishes would just go away. It is two weeks now since the infamous Tesco advert, offering ‘Job Seekers Allowance plus benefits’ working nightshifts, provoked public outrage which rained down on Tesco’s Twitter and Facebook accounts.

This anger swiftly moved on to target other high street stores taking on forced unpaid labour for benefits, also known as workfare.

Public pressure has resulted in numerous high street stores dropping out of the government’s workfare schemes.

As the government attempt a damage limitation exercise to rescue their failing schemes – which also seems to involve Iain Duncan Smith attempting to intimidate peaceful protesters – the issue is one that they will find hard to shake off.

This April the government’s Youth Contract will be launched – but rather than creating any jobs for young people, it is another round of workfare.

After Nick Clegg’s betrayal of young people with the raising of university fees and the scrapping of the Education Maintenance Allowance, not to mention his contemptuous and insulting comments about young people “sitting at home” last week, he is surely the last person any young person would want to sign any sort of contract with.

Yet this has not deterred the deputy prime minister. who last November announced his £1 billion Youth Contract scheme to tackle youth unemployment, which currently stands at 1.02 million – meaning one in five young people are not in employment, education or training.

The three-year scheme starting in April this year will provide at least 410,000 new work places for 18-24 year olds; however, despite all the hype, the youth contract is nothing new – rather it is simply the bolstering of three existing schemes, apprenticeships, the Work Programme, and Work Experience, all of which have raised significant concerns, particularly the latter two for their use of workfare.

The Youth Contract, then, is an expansion of the use of workfare in high street stores, as well as charities and public bodies. This is yet another betrayal of today’s youth.

Workfare is wrong for a number of moral and practical reasons.

Forcing someone to work against their will for no pay is clearly wrong. The Human Rights Act enshrines this idea, stating: “No one shall be required to perform forced or compulsory labour.” Furthermore, as the TUC noted in their 2010 Final Agenda: “Compulsory workfare schemes are in contradiction to the notion of welfare rights.”

Finding oneself unemployed is not a desirable situation and therefore benefits are there to support people at this time. To force them to work in order to receive their benefits is to punish someone for a situation over which they had little control.

On a more practical level, workfare simply does not work.

“There is little evidence that workfare increases the likelihood of finding work.”

“[The] workfare approach is least effective… in weak labour markets.”

The emphasis on making the individual ‘more employable’ is made redundant when nationwide there are four people for every job vacancy, with this number increasing dramatically in some hotspot areas.

Indeed, there are arguments that workfare may even make the person less employable, as forced labour is not exactly a positive addition to the job seekers’ CV while also reducing the time they have to job search. Workfare distracts from the structural causes of unemployment. It may even contribute to unemployment as paid employees are gradually replaced by workfare labour.

Yet, despite the compelling moral arguments against workfare, the strong evidence that the approach is utterly ineffective, and the public outrage it has provoked, the coalition government are intent on rolling it out further through the youth contract.

Furthermore, the DWP has admitted that once a job seeker has ‘expressed an interest’ in a work experience placement they must work without pay, with a one week grace period during which they can escape, for up to eight weeks, or else lose their benefit.

These work experience placements in Holland and Barrett, Asda, and HMV, to name but a few, involve unstructured, arduous, repetitive work with unpaid workers doing identical jobs to paid workers. However, these unpaid workers also find themselves given the worst jobs that no one else wants to do.

There is no guarantee of a job at the end, only an interview and the unpaid workers must still actively seek paid employment and attend their fortnightly job review. The Youth Contract proposes to create 250,000 more of these workfare placements over three years.

The work programme is also a compulsory scheme that young job seekers will be forced to take part in. The scheme is run by ‘prime providers’ (mostly private companies such as Serco and A4e) who have complete control over the process and are totally unaccountable.

There is also the threat of four weeks of mandatory work activity if they reject a subsidised job offer. As with the work experience programme, the young person may be given an unpaid work placement in which they are doing the same, and perhaps more, work as paid employees.

This sum of money is in effect a subsidy to the private prime providers who the government are already paying significant sums to get young people into a job. And no doubt, before the employer recruits the young person, the young person will have already provided them with free labour.

Workfare is not going unchallenged.

Boycott Workfare is a fast growing nationwide campaign organised by unemployed people, anti-cuts campaigners, charity workers, trade unionists, and other concerned citizens to take action on those companies profiting from workfare, encourage organisations to boycott it, and ensure that people know their rights.

We have called for a nationwide day of action on March 3rd against high street stores which take on workfare labour and to call for welfare rights and living wages for all. This action call out has been taken up all over the UK with actions being planned in more than 20 cities and towns and many more joining on a daily basis.

Indeed, such is the momentum of the campaign, that one may wonder if the government will even be able to implement the Youth Contract this coming April. Nick Clegg declared that the youth contract will ‘provide hope’ to the young jobless, but hope is not found stacking supermarkets for free for months on end.

Join us and take action, before we all find ourselves working for free.

• Workfare versus compulsory work: When is it right and wrong to mandate labour? – Richard Exell, February 24th 2012