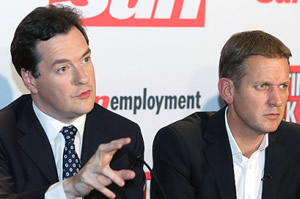 The UK economy may be back in recession, on the technical definition of two consecutive quarters of declining real GDP. UK Gross Domestic Product contracted by 0.2 per cent in the final quarter of 2011 and many economists think that it will contract again in the first quarter of this year.

The chancellor said the drop in output in the final quarter of 2011 ‘was not entirely unexpected’ and this is true in the sense that economists have been predicting it for the last few months.

But just six months ago, there were very few forecasters expecting the UK to return to recession.

It is convenient for the government to blame the deepening euro zone crisis for this development, and it has probably had some effect on consumer and business confidence, and thus on investment spending and hiring.

But exports have been relatively resilient and weak domestic spending is the main problem. This is due to the squeeze placed on household spending power by higher commodity prices, the increase in VAT and the government’s cuts in public sector employment. 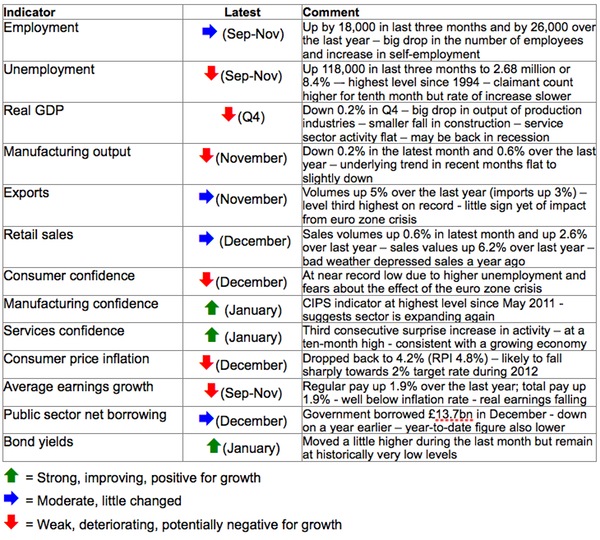 Provisional figures show the UK economy contracted by 0.2 per cent in the final quarter of 2011.

Various explanations for this poor performance have been put forward and most economists believe some combination of them is to blame. They include: the fact that recoveries from recessions caused by the bursting of asset bubbles tend to be weak, the effect of high food and energy prices on households’ spending power, the euro zone crisis and the speed with which the government is choosing to cut its deficit.

What happens next appears to depend primarily on developments in the eurozone. At best, growth in the UK economy during 2012 will be a little better than in 2011 (i.e. better than 0.3 per cent over the year to the fourth quarter) as lower inflation eases the squeeze on households.

At worst, a deepening of the euro zone crisis could lead to a renewed credit crunch and reversal of recent increases in business confidence, turning what could be a mild recession (if it is a recession at all) into something more serious.

These increases in business confidence – in manufacturing and in the service sector – are intriguing. Despite a collapse in consumer confidence and no let up in the gloom coming out of Europe, they suggest companies have started 2012 in a more optimistic frame of mind. This is certainly not consistent with the notion of the economy being in recession.

Few details are available but it is likely that destocking by manufacturing companies was the main factor behind the fall in GDP. Over the last year, excluding the bounce back from last December’s bad weather, growth has been just 0.3 per cent.

2. Retail sales volumes have improved as inflation has eased: The volume of retail sales increased by 1.1 per cent in the final quarter of 2011 (making it unlikely that lower consumer spending was a factor contributing to the fall in GDP), while the value of sales was up 1.7 per cent.

Despite low wage inflation and rising unemployment, households are still willing to increase their spending on the high street and the internet.

The increase in prices – 0.6 per cent – in the final quarter was lower than recent experience, so this extra spending converted into the strongest quarterly growth in sales volumes since the second quarter of 2010.

4. Business surveys improve in January: Contrasting with the gloom among consumers, business confidence started 2012 on a more buoyant note. The purchasing managers’ survey of manufacturing recorded a jump in confidence, output and new orders in January, lifting the overall index to 52.1, which suggests the sector is expanding again.

The latest CBI monthly survey showed a similar picture. Meanwhile, the service sector index rose to 56.0 – a ten-month high. In the past, confidence around these levels has been consistent with the economy growing at around its trend rate – about 0.6 per cent a quarter.

5. Manufacturing output is weak: Manufacturing output fell by 0.2 per cent in November and was 0.6 per cent lower than a year earlier. The trend in output has been flat to lower for several months. Performance has become mixed across sub-sectors, with output down in seven and up in six over the last year.

6. Modest increase in employment: Employment in the latest three months, to November 2011, was 18,000 higher than in the previous three months and 26,000 higher than a year earlier. However, the number of employees fell by 93,000 over the last year, while the number saying they were self-employed increased by 138,000.

It is not clear whether some of this increase in self-employment represents hidden unemployment. There are also over 1.3 million people working part-time because they cannot find a full-time job.

Over the last quarter unemployment increased by 118,000. The claimant count measure has gone up for ten consecutive months, though in recent months the scale of the increase has been falling and in December it was just 1,200.

There will be a further big fall in January when last year’s increase in VAT drops out of the calculation and cuts energy charges will help push inflation even lower in coming months. By the end of 2012 consumer price inflation could be below its two per cent target rate.

9. Wage inflation stuck close to 2 per cent: Average earnings increased by 1.9 per cent and regular pay was also up 1.9 per cent over the year to the three months ending in November 2011. Regular pay in financial and business services was up 3.5 per cent, while pay in other sectors only increased by around 1.5 per cent.

10. Government borrowing is below last year’s path: In the first nine months of the 2011/12 fiscal year, public sector net borrowing (excluding financial interventions) was £103.3 billion, down from £114.6 billion a year earlier. It appears that borrowing for the whole year is set to come in lower than in 2010/11 despite weak economic growth.

This is the result of discretionary fiscal tightening by the government, but higher price inflation will have helped. The OBR’s latest forecast for borrowing in the full year 2011/12 is £127 billion; this may be undershot.

11. Interest rates remain at 0.5 per cent; QE at £275 billion: The Monetary Policy Committee left interest rates at 0.5 per cent in January and the scale of quantitative easing at £275 billion. With the economy possibly back in recession and inflation now falling, there is speculation that the MPC will increase the scale of quantitative easing, perhaps as soon as at its February meeting.

12. Government bond yields close to historical lows: The 10-year UK government bond yield rose a little in January, but remains not far from 2%. This reflects the poor outlook for growth and the improving outlook for inflation, Bank of England buying of bonds to implement quantitative easing, and the ever-receding prospects of higher interest rates in the UK.

13. Sterling little changed in January: There was little movement in any of the main exchange rates during January.