Tom Rouse rounds up the week’s news from around the world, including the SOPA blackouts, the Costa Concordia tragedy, and the latest from the Republican race. 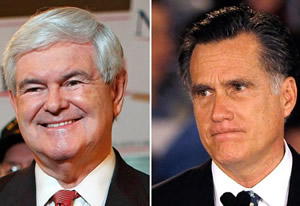 The already turbulent Republican primary season has gone through its most dramatic week yet, with Newt Gingrich winning the South Carolina Primary, derailing the Mitt Romney juggernaut.

“This may be the start of one of the most remarkable comebacks in modern American political history.

“Newt Gingrich has looked down and out more than once in the 2012 Republican race for the White House.

“But the 68-year-old former Speaker of the House has blown the race wide open with his victory in the South Carolina primary.

“The scenes at his victory party in the ballroom of a Columbia hotel were those of a campaign that has rediscovered its verve.”

Gringich, who looked to have slumped into an irreversable decline, saw his fortunes dramatically revived following a surge in polling in South Carolina. It is unclear whether this is a genuine revival in his fortunes or a flash in a pan, but it will give hope to the large sections of the Republican Party who are still hoping for an anyone but Romney candidate.

The week has also seen both Jon Huntsman and Rick Perry drop out of the race. Perry, who had started the campaign as a serious contender, was undone by his poor performance in debates and failure to see off Bachmann and Santorum, his main rivals for the social conservative vote.

His endorsement of Gingrich will further cement the latter’s recent rise in the polls and may help boost Newt’s financial position, with Perry having a proving track record in attracting financial backing.

Huntsman’s withdrawal also came as little surprise, after he failed to beat Ron Paul in New Hampshire, the state he had based his entire campaign strategy around. The darling of much of the media and many independent voters, Huntsman was perceived as too moderate by the ever more right-wing GOP and he was never able to garner significant support amongst the Republican base.

Despite the ever-dwindling field, Romney has endured a difficult week. He struggled to fight off attacks from Gingrich in Thursday night’s debate and looked uncomfortable dealing with core Republican issues: healthcare, taxes and abortion.

The announcement that Rick Santorum had actually won Iowa has been a further blow to Romney’s inevitability strategy.

President Obama has had a relatively quiet week, but has received positive news from recent Gallup polling. Their unemployment survey suggests that there has been a small decline in the number of those identifying as unemployed. His approvals have also steadied at -1 after a turbulent few weeks and these are likely to increase if US voters recognise an improvement in the economy.

Wednesday saw sections of the Internet, including Wikipedia and Mozilla, blacked-out in protest against SOPA and PIPA. These controversial pieces of legislation seek to crack down on illegal file sharing, in particular films and other forms of media hosted on foreign servers.

However, there has been a vigorous campaign by Silicon Valley against the bill and it has led to cracks appearing in both the House and Senate, with many politicians, including rising GOP star Marco Rubio now saying they cannot support the bill in its current form.

Chicago, meanwhile, is celebrating its first day without any shootings or murders in just under a year.

“While we are making progress, we still have work to do and will not be satisfied until we significantly decrease the number of murders in every community throughout the city”

The Costa Concordia disaster has dominated headlines in Europe this week. The cruise ship ran aground on Italy’s coastline last Friday and has already claimed the lives of 11 people. Searches are still on going for the remaining passengers, but poor weather conditions have hampered the rescue effort.

The tragedy has been tinged by farce with the ship captain’s excuses as to why he allegedly abandoned ship when passengers were still on board becoming ever more ridiculous. His latest claim, that he slipped and fell into a lifeboat accidentally, has been treated with widespread suspicion by international media.

In Australia civil rights campaigners have triumphed in their long campaign to have the Aborigine people recognised as the first inhabitants of Australia.

Julia Gillard has pledged to act upon the recommendations of a panel of independent experts which said the Aborigines should be recognised as Australia’s native people and their continuing cultural contribution to the nation should be recognised. Gillard has said she will propose changes to the constitution to enshrine their rights and remove the last hints of racial discrimination.

Any changes to the Australian constitution will require a referendum and historically it has been tough to amend the constitution due to a majority of people and states being required to vote in favour of changes.

The Burmese President has called on the West to lift sanctions claiming has country has instituted a reform agenda that will allow Aung San Suu Kyi and her party to enter parliamentary elections.

“I believe that you need to know our aims, and they are to have peace and stability and economic development in our country. For the future, we need to continue to take necessary actions to achieve these goals.”

• The need for disaster prophylaxis – managing the risk, not the crisis – Debbie Hillier, January 19th 2012

10 Responses to “The World Outside Westminster – Oh, Carolina”