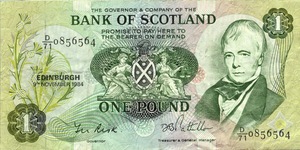 As the debate over Scottish independence rumbles on, an editorial by economic journalist Martin Wolf in the Financial Times raises further questions about the ability of an independent Scotland to retain the fiscal strength it has as part of the UK.

A newly independent small country with sizeable fiscal deficits, high public debt and reliance on a declining resource for 12 per cent of its fiscal revenue, could not enjoy a triple A rating… To avoid the risk, it would need to lower its debts quite rapidly. This would require even greater austerity than in the UK as a whole…

This links directly to a second question: Scotland’s monetary future…

Remaining within the sterling area for an unknown period, as the Scottish National party suggests, cannot be a unilateral decision. True, one possibility would be for Scotland to adopt sterling as its currency, without access to the Bank of England…

Yet, in that case, neither its financial institutions nor its government would enjoy a lender of last resort, with lethal consequences in a crisis – as we have seen in the eurozone… Scotland would enjoy neither monetary nor fiscal independence.

This, then, connects to a third big question: the future of Scotland’s financial industry.

Because of its full integration inside the UK, Scotland is home to a number of very large financial institutions that do most of their business elsewhere, particularly in the rest of the UK.

The Scottish government would not have the fiscal resources to back these entities if they got into difficulty.

The Scots need to understand that independence would deprive them of the benefits of pooling resources and bring real costs.

They cannot assume they would be able to remain inside the sterling area or retain anything like their present financial sector.

They can also not assume they would sustain the UK’s credit rating and be able to enjoy their current level of spending either, even if they were to receive what they see as their share of North Sea revenue.

Wolf’s warning follows a similar concern from former general chief of staff Lord Dannatt, who argued that Alex Salmond had to set out a blueprint for defence and foreign policy prior to a vote on independence if the electorate were to be able to make an informed decision.

Unlike Dannatt, however, Wolf presents concrete concerns about post-independence policy which will be hard to rebuke by suggesting that they ought to be discussed after independence.

In the end, it took until today for Salmond to give a more detailed defence policy, as the Telegraph reports:

Alex Salmond, Scotland’s First Minister, is demanding that several historic units with centuries of service in the British Army should become part of a new defence force in Scotland if he wins a referendum on breaking up Britain.

Mr Salmond said that 2010’s defence review had produced a template of how armed forces would look in an independent Scotland. He said one naval base, one air base and one mobile armed brigade was “exactly the configuration” required for a Scottish defence force.