Following Alex Salmond’s outlining of the plans for the referendum on Scottish independence, Ed Jacobs stresses the need for a positive vision of the future. 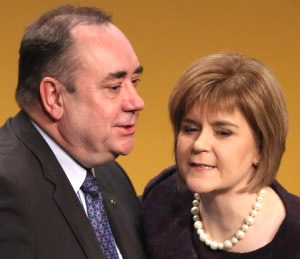 Sign up to our weekly “Week Outside Westminster” email service summarising the week’s news from Scotland, Wales and Northern Ireland

As 2012 began the prospect of Scottish independence seemed a distant thought, relegated by the SNP to a mere promise to hold a vote sometime in the second half of the current Scottish Parliament. Having indicated on the Andrew Marr programme just a matter of weeks ago that he wanted a vote sooner rather than later, little could David Cameron have imagined the speed with which the details of an independence referendum would be revealed.

In the space of just a few short weeks, we now have a date for the vote, Autumn 2014, and after yesterday’s announcements from Alex Salmond a suggested question; a proposed electorate; a pledge that the Electoral Commission will oversee the vote; and suggested spending limits for the campaign.

Indeed, we now also know that the SNP’s preference is to keep the pound and establish a Scottish Defence Force.

All of a sudden, independence is no longer an abstract idea, but a very real decision for Scotland to take. And if the latest polling, surveyed straight after the publication of the Scottish government’s consultation, is to be believed, those in favour of an independent Scotland are now just 1 percentage point behind those favouring the Union.

Make no mistakes about it, the game is on.

Yet for all the bluster from the SNP about full independence, as Professor John Curtice has pointed out in the Scotsman, the long term polls show that Salmond et al have a mountain to climb if those south of the border will be needing to wave their passports as they past Hadrian’s wall. Hence Salmond’s calls for the option known as “devo max” to be included on the ballot paper as an option.

Whilst recognising Matt Gwilliam’s argument on Left Foot Forward that the option opens a whole can of words, it would seem a travesty not to use this as an opportunity to settle Scotland’s future for a generation, once and for all.

The argument against has largely been around the idea that the option isn’t viable as:

a) It’s a simple front for Salmond to save face, knowing independence is unlikely; and

b) That, as Labour have argued, it is best to clear up the issue of independence and then consider further powers under devolution.

It has to be wondered, however, how Scotland’s economy would react to still more uncertainty about what powers Holyrood may or may not have. Salmond was right to argue Scotland is faced with the most important decision it has made for centuries. It would be perverse then to exclude from the debate the option which clearly has majority support from the people of Scotland.

The New Statesman’s figures themselves show that 51% of Scots support the option compared with 32% who do not, and as John Curtice argues:

“YouGov, ICM and Survation all find that more or less as many people think the referendum should take place this year or next year as reckon it should not take place before 2014.

“Equally, although Survation reports that half the Scottish public feel the referendum should ask about both independence and devo-max while only just over a third feel the choice should be confined to independence, YouGov find support for the two forms of ballot to be more or less evenly balanced.”

Political fall back it might be for Salmond, but the numbers clearly show that Scotland wants the option of devo max. If the “respect” agenda is to mean anything and if the referendum is to be truly Scottish-led, the voices of Scotland need to be heard.

What is more, for progressives in favour of the Union, it is Devo Max that provides potentially the best source of common ground around which they can unite to support a positive vision for the future of Scotland. Already the Liberal Democrats have indicated support for “Home Rule” whilst the former Labour first minister, Henry McLeish, has pledged to lead the campaign for this option, echoing support for it voiced by the senior Scottish Labour Peer and former MSP, Lord Foulkes.

Progressives against independence need a way out. They need to be able to tap into the deep-rooted hostility across Scotland to the Conservatives currently fuelling their desire to run things themselves away from the nasty, regressive, savage Cameron-led government.

Devo max is the way out for them to provide a positive vision for Scotland and its people, and as Martin Kettle in the Guardian has concluded:

“It is understandable for supporters of home rule, not just in Scotland, to be squeamish about engaging whole-heartedly with a process shaped by formidably effective separatists like the SNP under the leadership of a man whose hero is Parnell. But it could also be disastrous to stand aside from it.

“The home rule option could open the door to a wide-ranging British democratic revival, of which directly elected mayors would also be part. Civic Scotland, and civic Britain, need to engage with that home rule alternative, to define it, refine it, promote it and assert some shared ownership of it. This is big stuff for all of us, as Wales’s first minister Carwyn Jones has been quick to grasp.

“The short three months’ consultation that Salmond has announced is a vital period. But it does not matter for the SNP government and Scotland alone.

“It also matters profoundly for the rest of the United Kingdom, which may eventually have to come to terms with the wider implications of the home rule option that Scotland now seems increasingly likely to choose.”

23 Responses to “Progressives need a positive vision for Scotland”