In his State of the Union address last night, President Obama made a strong defence of the importance of higher education, writes Sally Hunt. 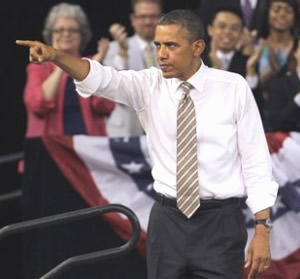 In his State of the Union address last night, President Obama made a strong defence of the importance of higher education. He said the US had to do more to ensure that education did not become a luxury and that it was economically imperative that all families could afford to send their kids on to study higher education.

He went on to say that more had to be done to bring down the burden of student loan repayments and that tuition fees were the biggest burden for young people considering their future. He even warned institutions against raising fees.

President Obama also defended universities’ research and warned against any cuts. He said that gutting research investment would let other countries “win the race for the future”. Looking forward, he added that America needed to support the same kind of research and innovation that led to the computer chip.

This afternoon, less than 24 hours after the President’s address, the government delivered its long-awaited higher education funding letter (pdf).

The letter to the Higher Education Funding Council for England (HEFCE) from the Secretary of State for Business, Innovation and Skills, Vince Cable, and the universities minister, David Willetts, detailed an £830m (18%) reduction in universities’ teaching grants in 2012-13.

It also confirmed a sizeable increase in the amount of money being pumped into student loans so students can meet the increased cost of their tuition. In addition, the government is carving out a further £62m from the HEFCE budget for an emergency fund to help it deal with unforeseen demand for student loans.

What we are seeing is a shift in the burden of funding thousands of university courses from the state to individual students. Such a move will put jobs and courses at risk as entire subject areas, such as arts and the humanities and social sciences, are stripped of almost all teaching funding.

This is an ideological move that will not save the country money, because millions of pounds will have to be pumped into the loans system so students can borrow money to fund their courses. Students will be paying their loans back over a longer period of time and, under the new regime, will be paying back higher rates of interest.

Our universities are globally-renowned, yet the government’s plans put that proud standing at risk. For all the talk of empowering students under a new market system, they will ultimately have less choice as fewer courses will be on offer.

President Obama’s State of the Union address should have acted as a timely reminder to politicians in this country of the importance of higher education and the role it needs to play in our recovery and our future.

Worryingly, the things President Obama warns against – higher fees, loan repayments going up and cuts to research funding – have formed the basis of this government’s higher education policy. If we want to enter, let alone win, that race for the future we could do worse than listen to the advice offered by the President of the United States last night.