Controversy rages about Liam Byrne and Labour’s developing position on social security reform as indicated in articles in the Daily Mail and The Guardian. 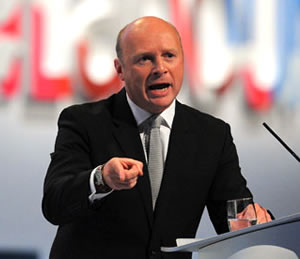 Controversy rages about Labour’s developing position on social security reform as indicated in articles in the Daily Mail and The Guardian, writes Declan Gaffney

In the Mail, a source “close to Liam Byrne” says:

“Decent Labour voters see their neighbours lie about all day and get benefits while they are working their socks off, and say, “Why should I vote Labour when they let this  happen?”.”

While in the Guardian, Byrne writes that William Beveridge:

For Sue Marsh, this is a betrayal of disabled claimants who are faced with massive cuts to sickness and disability benefits under the coalition’s welfare reforms.

“You talk of “unearned support” Liam… We know about the hundreds of thousands terrified about what happens to those who CANNOT earn support.

“Until recently, we believed you gave it freely.”

“Labour ministers have deliberately avoided mentioning disabled people in their rhetoric, and Liam Byrne explicitly attacks cuts to disability benefits in his article.

“They are not talking about disability benefits here.”

So who is right? Unfortunately, both are. Labour is trying to run with the hare (defending disabled claimants) while hunting with the hounds (attacking those who ‘spend a lifetime on benefits’). The problem is that these two groups are very hard to distinguish, because long-term benefit receipt is dominated by disability.

The evidence comes from the benefit system itself.

As Chart 1 shows, 57 per cent of all long-term working age benefit claims (running for five years or more) are among people entitled to Disability Living Allowance – the benefit which compensates people for additional care and mobility costs they face due to severe impairment.

A further 9% are for people receiving Carer’s Allowance because they are caring for someone receiving a disability benefit (DLA or Attendance Allowance). So two thirds of long-term benefit receipt is accounted for by identifiable disability.

But not all disabilities trigger entitlement to DLA, so the true figure for disability as a driver of long-term benefit receipt will be higher again.

So Sue is right to argue Labour’s ‘scrounger’ rhetoric is implicitly, albeit unintentionally, directed against disabled people. This is unavoidable as long as the issue is framed in terms of ‘a lifetime on benefits’. Attacking coalition cuts to disability benefits does little to counteract the framing of long-term benefit claimants as ‘scroungers’ when most are in fact disabled or caring for people with disabilities.

At the same time Sunny is right that Labour is making efforts to avoid disabled people being tarred with the ‘scrounger’ brush. But trying to balance the message in this way puts the opposition in a contradictory position.

Bear in mind that many severely disabling conditions are invisible to casual observers (and read Sue’s blog if you need to be convinced on this). So public perceptions are a poor guide to what is happening to benefit receipt.

The saloon-bar wisdom of statements like ‘decent Labour voters see their neighbours lie about all day and get benefits while they are working their socks off” needs to be confronted with the evidence the UK public grossly overestimates abuse of the benefit system and grossly underestimates the scale of disability in benefit caseloads.

One statistic serves to illustrate the point: there are a quarter of a million phone calls to DWP’s benefit fraud hotline annually. One per cent of these calls result in a sanction for benefit fraud. Put another way, 99% don’t. That means an awful lot of legitimate claimants are getting hauled over the coals every year because of snap judgments by ill-informed neighbours and acquaintances.

Now ask yourself: do we want opposition policy to be based on the perceptions of voters or on the evidence?

Would-be political tacticians will have no hesitation in opting for the former, but Labour will have to live with its chosen policy for the long-term. Policy based on ill-informed grievances will do nothing to address the real issues about social security, and, as evidence (pdf) from the United States suggests, may be doomed to political failure as well.

The main reason disability dominates long-term benefit receipt is that over the last 15 years, prior to the recession, other types of benefit claim reduced significantly – notably for lone parents and people on sickness benefits . Labour’s rhetoric in opposition seems strangely oblivious to its record in office- described by David Freud no less as “remarkable”.

There is serious thinking going on in Labour circles on what the next phase of social security reform might look like, and there are hints of this in Byrne’s Guardian article. But seconding grievances against benefit claimants and then seeking to evade the consequences by saying you aren’t talking about disability benefits is a untenable position.

The opposition should be trying to change the terms of debate, not passively reproducing them.

That wouldn’t generate friendly coverage in the Daily Mail – but as the blogger Mason Dixon, Autistic put it:

“Short-term headlines are not worth the lasting brilliance of a solid paradigm change in a national debate.”

• The paradoxical stability of welfare expenditure (and why we should be spending more) – Declan Gaffney, July 10th 2010