Tola Ositelu argues that the Queen’s Diamond Jubilee should hearken back to the original Jubilees of biblical days. 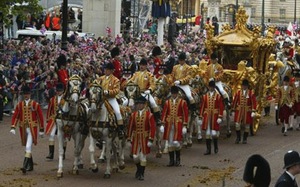 Michael Gove’s proposal for a new Royal yacht has raised questions about how best to celebrate the Queen’s 60 years as the British monarch. Such occasions have come to be known as ‘jubilees’, and in the past have involved much more than an extra bank holiday.

The original jubilee comes from the Jewish scriptures, and occurred every 50 years.

Rather than lavishing expensive vehicles on a monarch, in the jubilee year everyone took the whole year off from working the land – not just one day – living simply off surpluses from previous years.

All debts between people were to be cancelled. All slaves were to be released. All land was to be returned to the original sharing between the Hebrew tribes.

All these provisions were linked. Those working on the land got in debt when harvests failed. To feed their families they borrowed from their neighbours – supposedly without being charged interest – though many found ways to get round this law. As debts accumulated and families became unable to pay, they had to sell off their land to their creditors.

Rent was charged on the sold land, creditors got richer, debtors poorer, and debts were likely to increase. Now when struggling to pay their debts, debtors had to sell what was left to them; daughters, sons and themselves. And so many people ended up in slavery.

Another well known Hebrew word is Sabbath, the day of rest every seven days. Jubilee was a super-Sabbath, taking place after seven times seven years had passed.

Sabbath itself means ‘to stop’. The jubilee was a time to stop the economic system, ensure everyone lived well and simply, and bring everyone back to equality by freeing slaves, cancelling debts and giving everyone their land back.

The jubilee was not utopian, but was a radical way to periodically right inequality. The jubilee vision is a long way from buying a yacht for the Queen.

Today we live in a world of huge debts, both personal and national debt owed by everyone in the UK – individuals, companies, and the government – is 950 per cent of our annual income.

Debts owed between countries are large and growing rapidly. Since the millennium, the jubilee call for third world debts to be cancelled has led to $120 billion being written-off. But total debt owed to foreigners by the most impoverished countries still stands at $930 billion, an increase of $300 billion since 2006.

Whilst slavery is formally abolished in many parts of the world, the burden of debts still denies people their freedom. A family with a large mortgage and negative equity are trapped where they live.

Deeply indebted countries, from Greece to Jamaica, have their economies run by foreign powers. Land and capital have become increasingly owned by a few at the top; the one per cent with the most are the ones who profit.

A real jubilee would be to stop and see what we have become. Ensure everyone’s needs are met this year. And then radically cancel debts and divide lands and assets out more equally.

The criticism of a jubilee approach is that it ‘only’ addresses past injustice, it does not prevent it happening again. At the time of Jesus, Palestine was a land where many were heavily indebted to landlords and tax-collectors. A few such as the Roman leadership, King Herod and chief priests lived in luxury, whilst most went hungry.

At the start of his public work, Jesus declared ‘the year of the Lord’s favour’ – widely understood as the year of jubilee. One of his central messages to his followers was to “release us from debt, as we release our debtors.”

But as well as endorsing jubilee he goes beyond it, telling those who have assets to lend without expecting a return; to stop making debt a moral obligation which has to be fulfilled.

The jubilee message from Jesus is to stop, cancel the debts, and then live in a way that life-destroying debts are no longer created.

It is estimated 925 million people – 1 in 7 – go hungry every day; 205 million people are estimated to be unemployed, a 15 per cent increase since 2007. Across the world, people continue to suffer in the fifth year of a global economic crisis caused by too much debt. For all those living under this burden, a real jubilee would be a true time of celebration.

• Human rights as conditions for aid: how long is a piece of string? – Marta Foresti, January 5th 2012