Darren Johnson shows how consistently wrong the mayor's claims about electric vehicles has been. 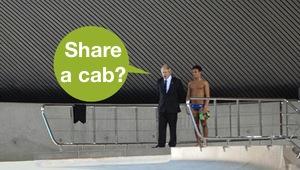 There is no more deserving subject for a spin doctor award than the mayor on electric vehicles – even if the award is from the PR barons of the motor industry. He has generated headline after headline on London as the electric vehicle capital of Europe, whilst actually delivering nothing much at all, writes Darren Johnson AM

In May 2009 he launched his electric vehicle delivery plan, in which he states:

“However, the mayor is committed to a step-change in the EVs, with 100,000 vehicles (or five per cent of London’s fleet) on the capital’s streets as soon as possible.”

Of course, the mayor will claim that as more electric vehicles come onto the market, his clever marketing and improvements to the charging infrastructure will deliver a step change.

The more experienced London journalists have developed a naturally sceptical eye which they cast over untrustworthy mayoral press releases. For example, on the subject of electric charging point infrastructure, the media did a wonderful job of correction in response to a mayoral press release of 14th February 2011 announcing that there would be 1,300 electric charging points by the end of 2013.

This was actually the same 1,300 charging points from which the mayor achieved very positive coverage for when he announced the previous February that they would be built over the subsequent next twelve months – something which clearly didn’t happen.

The mayor also claimed on 25th Feb 2010, that he had ‘confirmation’ that the money would ‘significantly speed up our existing plans’, enabling a total of 7,500 charging points to be delivered by early 2013.

This ‘confirmed’ funding now appears to have evaporated. That earlier press release also stated that the mayor would be helping to make London the electric car capital of Europe by installing 25,000 charging points by 2015, a previously solid mayoral target which has quietly disappeared from his latest press statements.

Unfortunately, several good journalists have been taken in by Boris Johnson and his promotion of electric taxis. It is not their fault, I imagine that even Boris believes what he says at the time.

A £1 million fund has featured in numerous media reports in October 2009 and again in December 2010, when:

“The Mayor and TfL have also announced a £1 million fund to encourage taxi owners to upgrade to low emission vehicles such as electric black cabs.”

Some of the failure to deliver is down to the mayor’s lack of attention to detail.

Having been previously involved in the discussions about a hybrid taxi as part of our green budget deal with Ken Livingstone, I know Boris Johnson was genuine in 2009 when he said

“TfL is also in the process of putting in place a low carbon taxi trial where taxis utilising low carbon technologies will be tested and assessed in ‘real world’ working conditions.”

However, the 2009 project was cancelled for “legal reasons” when the Mayor got into a tangle over European contract law.

Rather than explain clearly that we had moved onto Plan B, the Mayor continued the hype. He told the Guardian in December 2010 that

“We are also offering a juicy carrot, with the establishment of a fund to help speed up the introduction of electric black cabs”.

However, after I got him to admit that this fund still hadn’t been spent, he made clear that it wouldn’t be, until:

As recently as November 2011, the Metro carried the headline “All cabs to run off electricity by end of decade.”

To be fair to Boris that is not what he said.

He stuck to the policy which is the hope that all new cabs will be electric by 2020, which means that all black cabs might be electric around 2030 or later.

However, his press office were less concerned with this important difference and when asked about the story, emailed journalists to say that:

“The air quality strategy contains a pledge that taxis from 2020 will be zero-emission.”

The priority is now to help taxi drivers to replace the cabs which are over the 15 year age limit.

They will be buying the new Euro 4 taxi, which many of them tell me are more polluting than the cabs they are being forced to get rid of. I hope this isn’t true, but I am rapidly losing faith in anything coming out of the mayor’s office on this subject.

The decisive blow to the confidence of any journalist in the mayor’s office was when it emerged that the £1 million green taxi fund was subject to sponsorship and they didn’t actually have any.

Before I saw this answer in Oct 2011, I was oblivious to this fact and having checked with several London journalists, they shared my ignorance. Despite two years of questioning, numerous press statements and reports, the mayor’s office can’t point to a single instance when they stated this rather significant fact.

I do hope that all journalists will check with someone before reprinting mayoral press releases. As the chair of the statistics authority has pointed out, Boris Johnson:

“Does not always observe good practice in his use of statistics for media purposes.”