Alex Salmond unveiled the Scottish government’s referendum plans today, calling it the “most exciting in Scotland’s modern history”; we look ahead to the campaign. 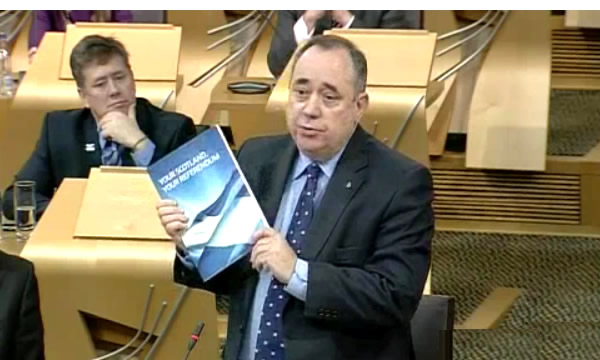 First minister Alex Salmond unveiled the Scottish government’s referendum plans today, saying the period in the run-up to the independence vote would be the “most exciting in Scotland’s modern history”; Left Foot Forward’s Mike Morgan-Giles looks ahead to the campaign

The general concept of holding a referendum does seems particularly appealing, given it gives genuine decision-making power to the people on major issues. Yet after the fiercely fought – and some, myself included, would say nasty – referendum campaign on a new electoral system last year, it seems a sense of déjà vu is upon us once again with the Scottish campaign.

The NO2AV campaign was littered with lies, damn lies and statistics.

The posters they used during the campaign had images of babies lying ill in hospitals, using these spurious and emotive pictures to link AV with reduced healthcare spending. They even deliberately misrepresented the amount AV would cost to implement on their posters.

This campaign of misinformation really was a sign of a failure in democratic institutions. People only have the means to make a fair value judgement when they have accurate information, but sadly the lack of oversight in this case allowed for a perverse agenda to win through. The Electoral Commission should have been able to step in last year during the referendum campaign, but unfortunately lacked the powers to do so, as it only deals with political parties.

There are signs, however, that this approach has started again in Scotland.

For example, suggestions Scotland wouldn’t be able to set its own interest rates if it continued using the pound. Yet after Czechoslovakia split, two new currencies were used – the Czech Koruna and Slovak Koruna – with both countries having control over their own rates. However, it is not just the policy in the spotlight, with Jeremy Paxman even comparing Alex Salmond to Robert Mugabe on Newsnight last night.

Today, Salmond launched a formal public consultation on the dynamics of the 2014 referendum, despite earlier attempts by David Cameron to impose the rules of the game on the Scots himself.

The strong mandate of the SNP gives them complete legitimacy to consult the Scottish people and then organise the referendum themselves.

There is also simply no legal reason for an order has to be passed to make a Scottish independence referendum binding – unless of course the UK government itself intended to ignore the result, which would provoke a constitutional crisis. Rather, this is simply yet another attempt to shape the agenda from Westminster and undermine Salmond.

The UK government should more than most understand the right to self-determination, following invasions in recent years of places such as Kosovo, Iraq and Libya. It is difficult to understand how the government can justify intervention in others parts of the world in the guise of human rights and democracy, when it seeks to restrict Scotland’s own right to choose.

The Universal Declaration of Human Rights states “all peoples have a right to self-determination” and that “by virtue of that right they are free to determine their political status and to pursue their economic, social and cultural development” – this is surely therefore the most important principle; indeed the world’s most recent nation state, South Sudan, was recognised quickly by the UK following its independence.

What we now need is a fair campaign, with the Scottish people deciding the rules, with a respected oversight body monitoring the campaign. After the farce of the electoral system referendum last year, another tainted campaign won’t speak volumes for fairness or democracy.

• Salmond has questions to answer, because the evidence doesn’t support him – William Bain MP, January 24th 2012