King of Labour's Left Tony Benn today called for the Speaker of the House of Commons to be made President of Britain. 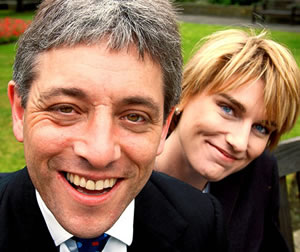 King of Labour’s Left Tony Benn today called for the Speaker of the House of Commons to be made President of Britain.

Appearing before Parliament’s Political and Constitutional Reform Committee this morning, the inventor said:

“I think the problem with a directly elected Head of State is a problem really you get a conflict between two sources of authority, someone elected by the people, like an American President, would have a degree of authority that they could claim was greater than the authority of those in Parliament, who are large numbers and divided and so on, so I prefer the idea of a titular Head of State, and strangely enough if you’re looking for a suitable titular Head of State I think the Speaker of the House of Commons would be perfect, he is elected by Parliament, he’s respected, he understands the constitution, and if you had him and a prime minister who’s really accountable for what he did I think that would be the best balance you could get.”

Speaker Bercow’s already got his Coat of Arms, so why not President John and First Lady Sally?!

35 Responses to “Benn: Bercow for President!”