Daniel Hannan and that 'there are no public sector cuts' brigade are being perverse. By their framing, we could end up much poorer & they could declare victory. 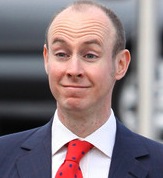 Daniel Hannan was at it again in the Daily Telegraph on Wednesday insisting that only the ignorant, willfully or otherwise, could insist that there were no cuts. He proclaimed:

“Total government spending has risen in every month since the Coalition was formed, and now stands five per cent above where it was in the final demented weeks of Gordon Brown’s splurge. Borrowing, too, has risen: the government will write IOUs worth £127 billion this year.”

We can argue out on the statistics – that Hannan has not taken into account inflation, or the rising healthcare costs of an ageing population.

But the real problem with Hannan and the rest of the ‘there’s no cuts’  brigade’s framing is that we could, in theory, enter into an economic downward spiral landing us somewhere in the stone age, and they could declare victory. How so?

What Hannan and company are skipping over is that no Government decides to ‘cut total spending’. Governments decide to cut discretionary spending – spending on the stuff we want to spend on like healthcare, education, parks and so on. Such spending is due to be cut from 27% of GDP in 2010 to just 20% of GDP in 2014-15.

But there’s also mandatory spending, like unemployment benefit and debt repayment, that government doesn’t get to decide whether it pours money into – events force it to do so.

You can argue until the cows come home that total spending is not coming down. But its discretionary spending that the public policy argument centres on, and what voters feel.

Crudely put, the right-wing analysis of the situation is that the government is just like a household, and the deficit is an irreducible problem – its primary cause is spending more than you tax. So if you cut discretionary spending, hey presto, the deficit is closed. (Logically there is another option – raising taxes – but the right tend to find their inner stimulater when the dread T-word is mentioned.)

Equally crudely put, the Keynesian analysis is that the state is so huge – currently government spending makes up 46 per cent of GDP – that it has far more symbiotic relationship with the economy as a whole.

If you cut discretionary spending, by lets say sacking public sector workers,  then mandatory spending – in the form of unemployment benefit for example – goes up. Furthermore as demand is sucked  out of the economy, tax receipts fall, and as the government is forced to borrow more to make up the shortfall, so do interest payments on debt.

To put it another way, a government deficit is not an irreducible problem but a symptom of a bigger problem – a contracting or slow-growth economy caused by lack of demand.

If demand is low, growth fails and the state ends up in deficit. If the economy grows fast enough, the government will end up in surplus.

The right characterise Keynesians as arguing for greater spending. This is not quite true. Keynesians argue that you have less of a choice on spending that you think you do, and that as you cut discretionary spending, mandatory spending goes up.

The stronger you believe that what we face is a demand crisis, the greater you believe the trade off to be. That is why Arch-Keynesian Lord Robert Skidelsky made such a savage attack on much of the thinking behind the ‘There is no such thing as cuts’ brigade on Tuesday.

To be fair to Hannan, he does give ammunition to this Keynesian view in his collumn, while also side swiping at his pet peeves – the EU, foreign aid, and the NHS:

“[Osborne]  has made reductions in various departmental budgets, but these savings have been more than offset by rises elsewhere – higher benefits claims, debt interest payments, increased spending on healthcare and foreign aid and, not least, much larger contributions to the EU.”

He even quotes a graph from the Spectator’s Coffee House blog that can make the Keynesian case:

” I draw particularly to the attention of any teachers and LEA officials who joined today’s strike: by the end of this parliament, we’ll be spending more on debt interest than on the entire education budget (hat-tip, Peter Hoskin): 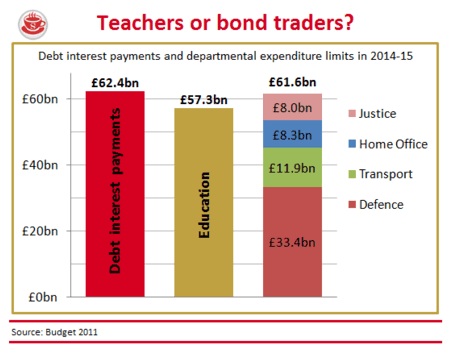 It is in effect saying “Yes, we realise that your Sure Start Centre has had to shut down, but because there’s a whole bunch of people now in the dole, there are no cuts’

At the very worst, we are tackling a demand crisis by cutting demand. This will lock us in to a downward economic spiral of ever increasing debt. We will all end up much poorer, but because we are spending billions on jobseekers allowance and debt repayment, instead of schools and hospitals and so on, Daniel Hannan, John Redwood et al will be able to claim vindication. And it will be utterly miserable.

• Lebanese politicians hurl glasses and chairs at each other on live TV – Alex Hern, November 25th 2011

• The case for spending to save has been made and won, so do it already – Joe Randall, November 23rd 2011