It was revealed today that Margaret Thatcher was advised to abandon Liverpool to “managed decline” by Geoffrey Howe in 1981; Gavin Knight looks at her legacy. 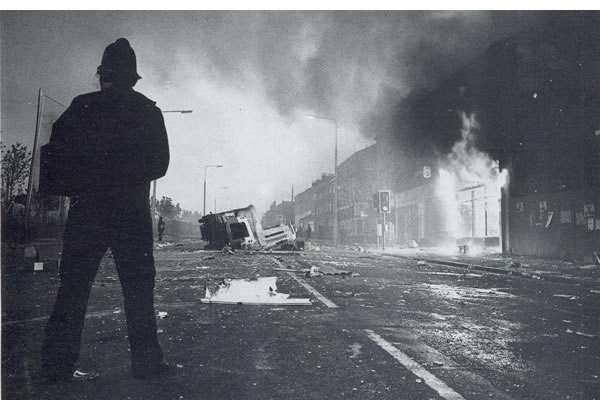 It was revealed today that Margaret Thatcher was advised to abandon Liverpool to “managed decline” by her chancellor, Geoffrey Howe, in the wake of the Toxteth riots of 1981.

In his memo to the cabinet he is quoted as saying:

“We must not expend all our limited resources in trying to make water flow uphill.”

Thirty years on, in the wake of similar riots, residents of UK inner cities feel rising anger they have been abandoned.

It’s as if the policy of the last 30 years were implemented on Howe’s advice.

I spent two years researching life in the deprived inner city areas of Manchester, Glasgow and London for my non-fiction book ‘Hood Rat’ (published July 2011) and spoke to young people, youth workers, social workers, and residents as well as spending time with frontline police units in Moss Side, the East End of Glasgow and deprived parts of London.

They told me they had been abandoned by politicians, the media, and social infrastructure and were left to forge their own violent alternative world.

Thatcher’s right-to-buy policy meant upwardly mobile residents could leave estates; while the collapse of manufacturing in favour of a service-based economy meant the heart was torn out of many communities.

As Owen Jones points out in CHAVS, you can’t build a community around call-centre and supermarket jobs. In Glasgow I spoke to former welders and platers from Clydebank whose offspring were now struggling to find jobs in the fitting room at TK-Max in the retail parks that replaced the steelworks in places like Park Head.

In the vacuum left behind only one thriving, entrepreneurial business presents the younger generation with opportunities to make cash: the UK’s £4.5 billion drug trade. It has a dynamic recruitment structure, cash incentives and training programmes all in place.

The results of this “managed decline” are that government has effectively retreated from these areas and the residents feel completely disenfranchised.

The result is simmering violence and resentment.

Steven Pinker, in his recent book, says the most violent places are ones where no form of government exists: failed states, drug cartel territories. British inner cities are increasingly violent places to live for the same reason: they have been abandoned by successive governments.

In Easterhouse in Glasgow one 13-year-old was given a machete by his own mother on his 13th birthday. When Karyn McCluskey, the co-director of the Scottish Violence Reduction Unit, arrived in Glasgow there were 170 gangs with 3,500 members aged 11 to 23. Trauma doctors handled one facial injury every six hours and 70% of the violence went unreported.

I spoke to charming, baby-faced teenagers who talked about the pitched battles with machetes they had every Saturday like it was a weekend football game. I also went out with the cops in B Division in Shettleston who were weary of chasing gang members through the parks.

Shettleston is one of the most deprived wards in the UK. Life expectancy for a man is 14 years below the national average and the same as Baghdad or the Palestinian territories.

In Southall, London, I talked to a 14-year-old, former child soldier from Somalia, whose gun-toting skills were in great demand amongst the local elders, looking to enforce the drug trade. Southall also saw riots 30 years ago. Now it’s the cheapest place to buy heroin in the UK.

Three hundred and fifty thousand kids grow up with drug-addicted parents. I spoke to one mother, an aspirational middle class woman whose young son was killed in broad daylight by a drug addict out on bail.

There is a shocking human cost to the decline and abandonment of UK inner cities; we read far too many stories of teenagers, even children, being killed or killing each other in our forgotten inner cities. In Liverpool, 11-year-old Rhys Jones was shot by an 18 year old in August 2007 on the Croxteth Park Estate.

In recent weeks we’ve heard of a brazen stabbing of a teenager amid Oxford Street Christmas shoppers and the shooting of a Salford student, allegedly by teenage gunmen.

The newly revealed memos of Thatcher’s cabinet show they grudgingly pledged £10 million to regenerate Liverpool. The Tory coalition’s latest gangs report, published in the wake of the August riots, also pledges £10m. For that amount the coalition ambitiously promise to turn around 120,000 dysfunctional families by the end of Parliament. That’s £83 per family.

The third sector is key to the Tories’ regeneration strategy: mentoring and early years interventions are both highlighted as policies that Ian Duncan Smith has championed for some time at the Centre for Social Justice. The key issue around these policies is a question that lies at the heart of the Tories’ localism agenda: without the dynamic individuals to run the programmes, can they be replicated countrywide, in all inner cities ?

The flagship early years nursery in Castlemilk, Glasgow, the Jeely Piece Club, is a testament to 35 years’ work of exceptional individuals. Will similarly dynamic individuals be able to replicate it in other deprived parts of Glasgow like Easterhouse, Shettleston, Barrowfield and Mary Hill?

Similarly, Cameron and IDS have often praised the CIRV anti-gang model used by Strathclyde Police, but its success is largely the result of the extraordinary drive of the co-directors of the Violence Reduction Unit, Karyn McCluskey and Detective Superindendent John Carnochan. The model was piloted in Manchester and some London boroughs but fizzled out.

One thing I heard time and time again was that nothing saves a young person from a downward spiral into gang crime more than a stable job. There is also a proposal that the chancellor, George Osborne, will follow Michael Heseltine’s example and create enterprise zones to regenerate deprived areas.

The Work Foundation argues that enterprise zones do not work, they are gimmicks and already-deprived areas will not escape their cycle of deprivation.

They advocate that government should focus on:

The long-term drivers of economic growth: innovation, trade, skills, infrastructure and entrepreneurship. The recovery will be led by innovation, with a small proportion of high growth firms producing the majority of all jobs.

There is an enormous human cost to abandoning our deprived inner cities; government needs to find a way to regenerate these areas, ideally through stimulating small and medium-sized entreprises.

With soaring youth unemployment it also needs to re-engage the disenfranchised, disaffected youth who live there and help them back into education and training. This needs a proactive, inventive youth policy.

Sending vulnerable youngsters into lengthy custodial sentences at critical turning points in their lives is not the way forward. The young people who I spoke to all believed they have been not just been abandoned by politicians, but criminalised for being young.

• Enterprise Zones are the dusting down of a failed Thatcherite policy – Tony Burke, July 29th 2011