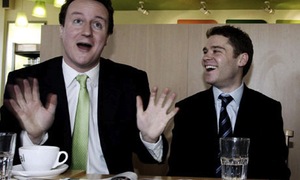 The latest offender in a string of badly behaved Conservatives has apologised for the fact that people were offended by his behaviour at a Nazi-themed stag party.

Aidan Burley, MP for Cannock Chase in Staffordshire, was in hot water after photos of his friend Mark Fourier’s Nazi-themed stag party were uncovered by the Mail on Sunday.

Reporting on the night, the paper wrote:

The MP, who was elected in 2010, sipped wine as one of the party goaded a French waiter, asking: ‘You are from Germany? No, you must be from Austria, then?’ and ‘Are you insulting his Reich?’

The man wearing the SS uniform was accountant Mark Fournier, 34,  a graduate of The Queen’s College, Oxford University, whose stag party it was. Wearing such a uniform in public is a criminal offence under French law.

His brother, businessman John Fournier, 37, gave the toast. Later, in the pub, he said of Mr Burley: ‘This man is a Tory MP. He went to Oxford as well. A Tory boy. He was the candidate for Berlin East.’

Mr Burley, who was standing a few feet away, was not seen to object to this or any other behaviour that evening.

The MP has since apologised – twice – albeit choosing his words carefully.

His first apology came in the original article:

“There was clearly inappropriate behaviour by some of the other guests and I deeply regret that this happened.

He made a similar statement on Twitter the day after. It may simply be that he doesn’t know that “I’m sorry” and “I’m sorry other people were bad and that you were offended” are different, but as apologies go, it leaves much to be desired..

Burley won his seat in the largest single swing from Labour to the Tories in any seat in the 2010 election. Standing in what was thought to be an unwinnable seat may have meant he avoided the sort of vetting – both of history and personality – which is common amongst prospective parliament candidates.

It is probably for this reason that his previous brush with the press didn’t raise alarm bells.

While at Oxford, Burley moved the annual dinner of his elitist drinking club, the (now defunct) King Charles Club, to Stringfellows, after they were banned from having it on college property.

Not only that, but he then paid to advertise that fact in the Times and Telegraph:

“The King Charles Club of the St John’s College, Oxford, held their annual dinner last night at Stringfellows … after attending divine service at the Banqueting Hall, Whitehall, and laying a wreath at the statue of the Martyr King in Trafalgar Square.”

It looks like the rot of Conservative Future, the youth wing of the Tory party, is spreading upwards quicker than ever.

As we reported in November, various CF organisations have got in trouble for:

Mocking the northern diet of “chips and gravy”; torching likenesses of Mandela and Obama; toasting apartheid; singing songs about “killing lots of kike”; disrupting student union meetings with Nazi-style salutes and cries of ‘Viva Pinochet’; complaining that gypsies “aren’t human”; arguing that you can be racist against jews but not black people; and describing themselves as “a better dressed version of the BNP.”

Our conclusion at the time was :

It may well be that what has changed isn’t that Conservative Future has got more racist and offensive over the years, but merely that whereas they used to do all of this in private, it now often spills out into public.

With the days of the sixth-youngest Tory MP now looking increasingly numbered, the past may be catching up with the Conservative Future.

22 Responses to “Nazi party Tory is sorry you were offended”