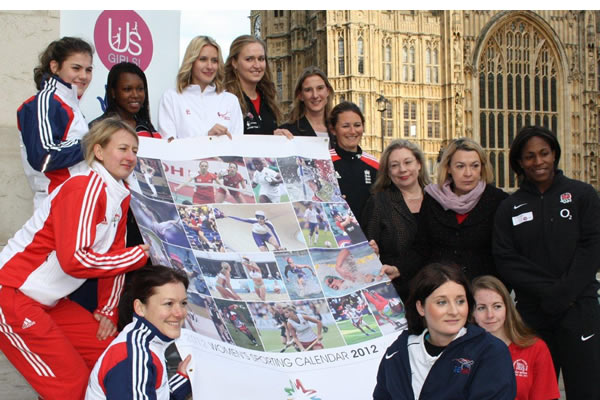 Sports minister Hugh Robertson today denied any responsibility for the school sport cuts – yet claimed credit for the school games, which are very much part of the government’s school sport strategy, designed to increase participation in competitive sport.

In Culture, Media, Sport and Olympics Questions in the Commons this morning, following a question from Tracy Crouch (Conservative, Chatham and Aylesford) about the lack of media coverage of women’s sport (a subject covered by Left Foot Forward in January), shadow culture secretary Harriet Harman grilled him on the impact of the school sport cuts, describing school sport as “the bedrock of participation”, something that “should be a priority”.

“Why has his government cut spending on school sports by 64 per cent, isn’t that sending a message that school sport no longer matters?”

“This department is not responsible for school sport, that is funded by the Department for Education, and actually what my Right Honourable Friend [Jeremy Hunt] has championed personally is a school games competition that absolutely is intended to drive up participation across both genders.”

“Well, he talks about driving up participation, but will he tell us how he’s going to monitor how much sport young people are doing in schools when he’s scrapped the school sports survey, when his government has cut school sports partnerships, it’s even more important we know the effect that this is having on participation in sport…

“Is it not remarkable that the ministers are sitting there saying it’s nothing to do with us, they really should be making an impact on other ministers in other government departments to make sure that they support school sport across the whole government.”

“What this department is doing is playing its part by introducing a new school games competition, that has been extraordinarily successful, 11,000 schools now signed up, and we’re also going to produce a new measure for the age group 16-24, precisely when we do take responsibility for young people coming up where participation has been falling, year on year, for the last ten years.”

Watch the exchange, and keep an eye out for Robertson saying “I had nothing to do with that” at 2:04:

So Robertson’s message appears to be the DCMS is in charge of the School Games, with the DfE responsible for school sport, and by definition competitive school sport (which he and his department have an awful lot to say about), and to blame for the cuts – issues that were all raised later in the session.

“What discussions has he had with the Department of Education about the cuts in school sports and the fact that school sports coordinators are being cut.”

To which the non-reply was, well, see for yourself:

“How will he ensure that my constituents benefit from the Olympics.”

“Some school sports partnerships did an excellent job, but overall participation amongst young people fell under her government, it fell from 58 per cent to 54 per cent over the last four years, three of which were under the last government.”

And on the School Games, competitive sport, and the scrapping of the PE and Sport Survey, shadow sports minister Clive Efford asked Robertson:

“The person who launched School Games was the Secretary of State for the Department of Culture, Media and Sport, not the Department of Education, now they have been using a figure of one in five children involved in inter-school competitive sport and they will know that that figure comes from the PE Sports Survey carried out of schools every year and that that figure is measured on the basis of children taking part in nine competitive sport events against other schools in a school year.

“Now we know from the Under Secretary of State for Education in the Westminster Hall debate that he says that that’s not an ambitious target, so can the minister tell us how is he going to measure the increase, the impact of School Games, on increasing participation in competitive sport, and is the benchmark nine times in the school year, or is it more?”

With the sports minister replying:

“Answer in two part, by the number of schools that want to sign up, and I’m delighted to say we’ve got 11,000 schools signed up, which I’m sure he would welcome, and the part of the equation for which this department is responsible, which is the cadre of people from 16-25, where we wil be making the announcement in the New Year.”

So there, it looks like, we have it – the “cadre” of people for whom the DCMS is responsible for is those aged 16-25 (or 16-24 according to Robertson’s earlier answer to Harman), the department responsible for the School Games is apparently only responsible for sport for 16-25 year olds, and seemingly takes no responsibility for school sport, or for the scrapping of the PE and Sport Survey.

What, then, of the figures of falling participation Robertson and Hunt cite? For 16-25 year olds overall that may be so, but for school children, the same children and age groups at which the School Games are aimed, talk of falling participation under the last government is simply not backed up by the evidence of the soon-to-be-abolished PE and Sport Survey.

• A “very large increase” in the proportion of pupils participating in intra-school competitive activities during the academic year – up from 69% (of Years 1 – 11) in 2008/09 to 78% in 2009/10 – an increase apparent in each and every year group, with the largest increase being in Year 1;

• 77% of boys participated in intra-school competition, compared to 73% of girls;

• 99% of schools held at least one sports day or equivalent during the academic year;

• 49% of pupils in Years 1 – 11 participated in inter-school competition during the academic year, continues the upward trend – with a five
percentage point increase in the last year; and 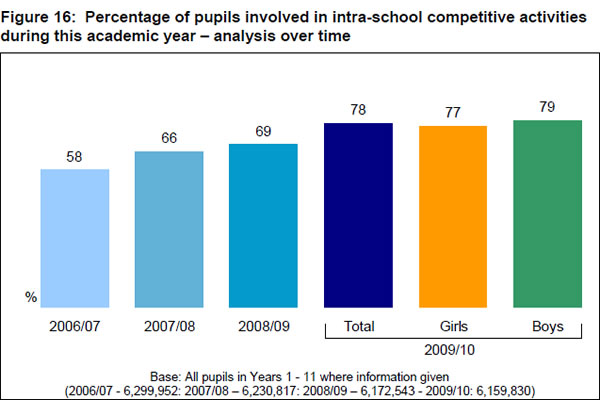 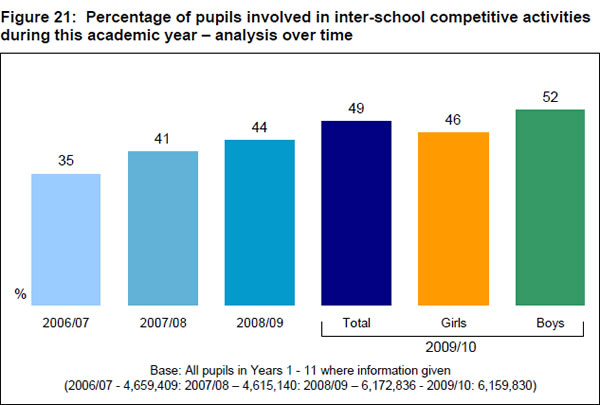 With the table below showing an increasing number of schools from 2003/04 to 2009/10 offering a broader range of sports: 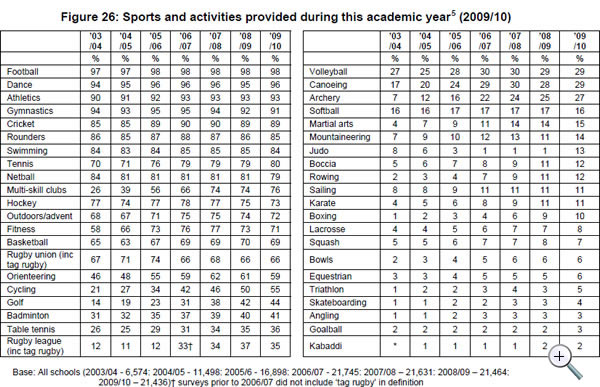 As we said last year:

“The success or more likely failure of the coalition’s new approach may never be known, as Mr Gove is also removing the need for schools to ‘report termly to the Youth Sport Trust on various performance indicators’, and, more significantly, ‘collect information about every pupil for an annual survey’ – the survey of all schools in England, from which the stats above have been gleaned; in other words, it may prove impossible to hold the government to account on this.”

• Priced out of the playground: Tory Wandsworth to charge kids to play – Shamik Das, May 12th 2011

13 Responses to “Sports minister: School sport “nothing to do with me… but the School Games are””