It now looks increasingly likely the EU26 will be able to use the full spectrum of European Union institutions, undemining David Cameron’s summit ‘success’. 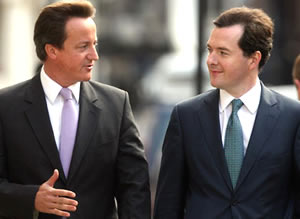 It now looks increasingly likely the EU26 will be able to use the full spectrum of European Union institutions – totally undermining one of David Cameron’s self-spun ‘wins’ for Britain from last week’s summit.

Mr Cameron was in sober form.

He seemed to many of us hacks in the press gallery to signal that Britain might yet give ground and allow the new euro-plus pact of 23 (and soon 24 or 25) countries to use at least some of the institutions of the full EU, in contrast with the early insistence of his chancellor of the exchequer, George Osborne, that the main point of Mr Cameron’s stand on Thursday night had been to veto the use of the “full panoply” of institutions by the new club.

Downing Street signalled that Mr Cameron was ready to yield on one of Mr Clegg’s objections – the Prime Minister’s assertion that the new “euro-plus” group of up to 26 nations should not use the institutions of the European Union.

One of the stated reasons for Mr Cameron’s veto was to ensure that the new group could not pursue its interests with the force of Brussels law, an outcome described by Mr Clegg as “ludicrous”.

Downing Street is paving the way for Britain to accede to the group using EU institutions.

The government had received legal advice and Mr Clegg’s objections had to be taken into account. There was “a sense of inevitability” that the group would gain access to the EU’s institutions, said one aide.

All a far cry from just a few days ago, when George Osborne insisted:

“The integration of the eurozone, which we think is necessary to make the single currency work, is not taking place within the full panoply of the European treaties, with the full deployment of the European institutions enforcing those treaties.

“And because we were unable to get British safeguards that might have allowed that to happen, we’re not allowing it to happen.”

So, when all’s said and done, what exactly did Mr Cameron gain from his brattish petulance?

15 Responses to “What exactly did Cameron get from the EU summit?”