George Irvin examines the effects of a Greece default, and finds they aren’t positive for Greece or the rest of the eurozone. 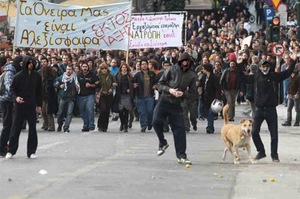 Most economists agree that by late 2011 or early 2012 Greece will default. The reason is simple. In the light of soaring market interest rates (over 26 per cent this month), Greece is now entirely dependent on bailout funds to pay off its debt.

For the debt-GDP ratio to shrink, the economy must grow at a rate faster that the rate Greece pays to borrow. But the 2008 credit crunch followed by the EU/IMF imposed austerity has led to Greek recession: the economy (GDP) shrank by 4.5 per cent in 2010 in real terms and is forecast to do so by over five per cent in 2011.

Even were the latest ‘haircut’ deal with Athens to go through, the debt-ratio would still be 120 per cent. In the absence of debt forgiveness, Greece is being pushed to the precipice.

What happens if Greece defaults depends on whether the default is ‘orderly’ (ie, debt restructuring within the euro) or ‘disorderly’; ie, Greece reneges on all its sovereign debt and leaves (or is expelled from) the eurozone and possibly the EU.

Because there is little evidence that the troika – the European Commission, ECB and IMF — are willing to agree to a major debt restructuring and/or forgiveness package, let’s assume that Greece unilaterally defaults and leaves the euro. Indeed, the Germans have hinted that this might be no bad thing.

If Greece adopted a new currency (the new drachma or ND) initially at parity with the euro, the currency could be expected to devalue very quickly by perhaps 40-50 per cent. In consequence, the Greek banking system would fail. The main assets of Greek banks – loans to Greek and other individuals and institutions – are denominated in euros.

Hints that Greece might leave the euro and adopt an ND have already led to a flight of capital — an official announcement (or even the anticipation of one) would lead to a full-scale run on the banking system. With deposits falling, banks would stop lending to one another and the economy would grind to a halt.

But that’s not the half of it. Although much sovereign debt issued under Greek law could be redenominated in new drachma, some could not; nor could much of the private debt of Greek firms and individuals. Revenue would now be in depreciating ND and paying off euro debt would become twice as hard, so bankruptcies would multiply.

With international markets unwilling to lend to Greece because of economic instability, the Greek government deficit, currently running above 10 per cent of GDP, could not be financed. So public services would be shut down and austerity would be even worse than at present, or else the deficit would need to be covered by printing money. Monetisation on such a scale would almost certainly fuel domestic inflation.

Nor would leaving the euro guarantee an export boom. Greece imports many necessities (including oil) for which there are no domestic substitutes, and since devaluation makes imports more expensive, this would generate further inflationary pressure.

Finally, the departure of Greece from the Eurozone might have very grave consequences in terms the accelerated spread of contagion.

Since the October 27 accord on the Greek bailout, we have seen the financial markets turn viciously on Italy. Most recently, a German bond auction has failed for the first time, suggesting markets are now factoring in a possible collapse of the Eurozone. Such a collapse would almost certainly plunge the world economy into a depression graver than that of the 1930s.

This is no time for calls to Greece to leave the euro – whether from the political right or left.

The costs for Greece could well far outweigh the benefits, as indeed the costs for Europe as a whole. Finance capital continues to shift the costs of the wider crisis to ordinary citizens. What is true is that Greece’s departure would reflect the near-criminal short-sightedness of Europe’s ruling elites in dealing with these costs.

• Greece is the word: Crisis in Athens as Papandreou set to resign – Alex Hern, November 3rd 2011

• Labour should break from the consensus and call for Greece to default – Barry Gardiner MP, July 4th 2011

29 Responses to “What happens when Greece defaults?”