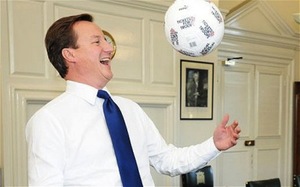 Team UK coach Georgie “Best” Osborne blamed the opposition and tournament organisers for the UK’s shocking performance over the last year, with the UK team sitting third from bottom in the GDP Euro League – just above Greece and Cyprus.

“We felt our defensive austerity tactics would pay dividends against more stimulated opponents, but then they all started to use the same negative growth tactics and that gave them an unfair advantage over us. But the other teams can and must learn a great deal from Team UK’s recent performance.”

The UK Youth Team has also hit a bad patch, which Under-24s coach Chris Grayling likewise blames on the other European teams.

“Our latest results show just how much our team’s confidence is being affected by the crisis in the Euro League, our European partners must take urgent action to stabilise the position.”

Meanwhile German coach Angela Deutschmerkel told her home fans that the EU League’s rulebook needed to be tightened up, and hinted that some teams might be expelled from the league altogether if they did not accept her proposed rule changes.