Alex Hern reports on the revelations from Brodie Clark’s testimony on Theresa May, borders and immigration to the home affairs select committee today. 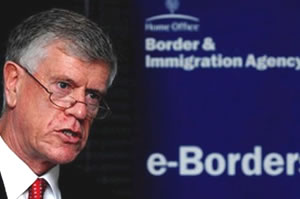 The home affairs select committee today questioned Brodie Clark, the former head of the UK Border Force, and Rob Whiteman, the chief executive of the UK Border Agency, about the allegations that a number of individuals were allowed entry to the country without going through all the proper border controls.

With the session – which was supposed to be an hour, but ended up lasting two and a half – now concluded, where does it leave May?

Andrew Sparrow for the Guardian thinks she is now “looking distinctly shoddy”, the Times agrees that she remains “under strong political pressure”, and even the Mail says that Clarke’s testimony “turned the heat squarely on Theresa May”.

Clark did indeed deliver some damning testimony. He unequivocally stated, again and again, that he had acted with full ministerial authority in implementing the trial of “lighter touch” border checks in 28 ports and airports.

Let me say at the outset that I introduced no additions to the Home Secretaries trial, nor did I extend it or alter it in any way whatsoever. […] I did not enlarge, extend or redefine the scope in any way…

Mr Chairman, I never went rogue, and I never extended without the Home Secretary’s authority that original trial.

This unequivocal denial of May’s claims may still lead to a “he-said, she-said” end-game, of the sort which looks likely in the parallel hearings on phone hacking, but as the Guardian point out, two positive points have emerged for her from this hearing.

The first is easy to understand:

The party are protecting her. The home affairs committee normally conducts its proceedings on a relatively non-partisan basis (unlike, say, the Treasury committee, which becomes intensely political). But today most of it Conservative members were clearly in “protect Theresa” mode.

The second requires delving slightly into some of the esoteric information about procedure and policy which caused the hearing to run quite so long. Some of the border checks which were suspended weren’t done so under May’s trial, but under guidance from 2007 stating that they could be if there was a health and safety emergency (the best example of which being that if the queues get too long in Calais, they start backing up onto the motorway).

It is this guidance which was used to occasionally suspend checks such as fingerprinting in Heathrow; as Andrew Sparrow explains:

It is clear that the guidance dating back to 2007 saying that checks could be relaxed on health and safety grounds in some circumstances created a grey area.

Clark thought this meant what he was doing was acceptable. Whiteman thought it wasn’t, and he based this partly on the basis that ministers did not actually seem to know anything about this long-standing loophole.

What is clear from the hearing is that Clark’s treatment at the hands of May and UKBA was pretty poor, but that in itself is not enough. Civil servants are, unfortunately, often sacrificial lambs to appease the capricious opposition, and just because this one managed to describe his sacrifice to a select committee does not make it a resigning matter.

• May is wrong: We can have a liberal immigration policy – Matt Cavanagh, October 7th 2011

8 Responses to “May “looking shoddy”, but not toast yet”