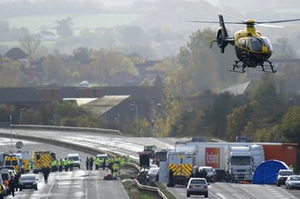 Parliament, as it does so well at times of tragedy, united to remember the victims of Friday’s horrific M5 crash tonight, following an emergency statement by new transport secretary Justine Greening.

Ms Greening told the House it would be “some weeks” before the cause of the crash, involving 37 vehicles, in which seven people were killed and 51 injured, will be known, adding she would “make sure that if there are any lessons to be learnt, those lessons will be acted upon”.

However, it was the human stories, the lives lost, the families left behind, not the politics or the questions or the investigation that struck home during the debate, most emotionally from Paul Flynn (Labour, Newport West) and Bob Stewart (Conservative, Beckenham).

Mr Flynn told the story of Tony and Pamela Adams, “who had been sweethearts for 50 years”.

“They were on a journey that they’d made many times before, and then within seconds, a normal situation descends into Hell on Earth.”

Col Stewart, meanwhile, spoke of those who had “the sad responsibility, if not duty, of identifying their friends or their family members”, recalling how it was something he himself had had to do:

“Twenty nine years ago I had the sad responsibility of identifying several friends who were killed in similar circumstances to what happened on the M5.”

As Ms Greening said in her earlier reply:

“There’s very little anyone would be able to say to their relatives at the moment that would provide any real comfort in this situation and under the circumstances of this tragedy, which the Honourable Gentleman points out happened instantaneously, which I think for families who lose people in those sorts of circumstances is a particular challenge to deal with.”

5 Responses to “The human tragedies of the M5 crash”