Richard Excell examines yesterday's employment figures, and finds concerning signs that we might be heading in to a double-dip recession. 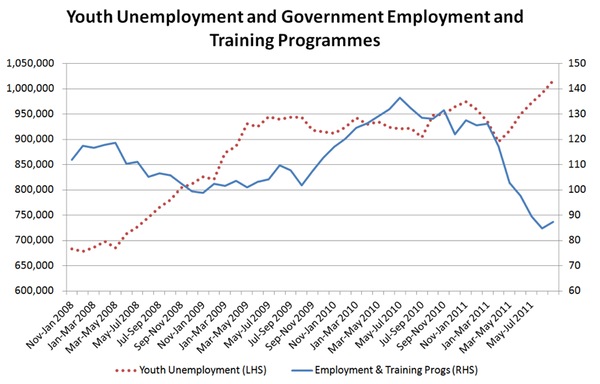 Originality and surprise are, supposedly, what the media are always interested in, but we’ve known for a month what the headlines from yesterday’s employment figures would be.

As was expected, the number of young unemployed people passed the million mark, reaching 1,016,000 – as Rory Weal has pointed out, this surpasses the level of the 1990s recession by some way. Almost as dreadful, the number of under-25s unemployed for over 12 months reached 259,000 – the highest figure since January 1993.

This is a good moment to juxtapose these results with what is happening to the numbers on government employment and training schemes. This figure has been falling since the spring – this was not so much of a worry in the first half of the year, but it has been more of a concern since unemployment started rising again and seems particularly shocking now:

Of course, these programmes aren’t just for young unemployed people, but the last government’s extra investment in employment programmes was heavily weighted towards youth unemployment – most of the extra places from late summer 2009 were for young people. Now is a good time to remember that, within a month of forming a new government, the coalition cut:

“£320 million from ending ineffective elements of employment programmes, including ending further rollout of temporary jobs through the young person’s guarantee (the ‘future jobs fund’) and removing recruitment subsidies from the ‘six-month offer’.”

The other message that the employment figures illuminate is that, as far as the labour market is concerned, this country might as well be back in recession. Sometimes the simplest charts are the most telling, and this is one of those occasions: 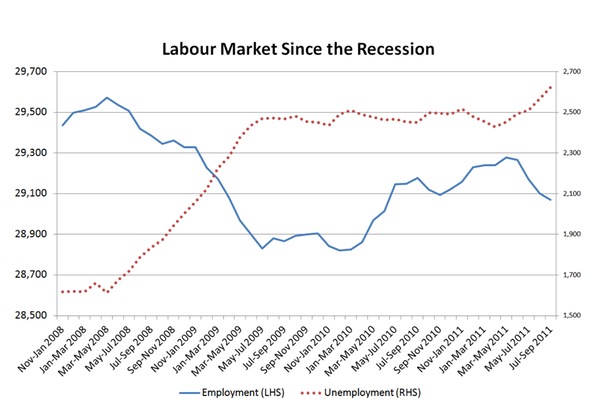 Employment was 197,000 lower in July to September than it had been in April to June, the biggest quarter on quarter fall since July 2009; this was the second month running when the quarter-on-quarter fall was over 100,000, the first time this has happened since July 2009.

Unemployment was 129,000 higher on the quarter, the biggest increase since July 2009; this was the second month running when the quarter-on-quarter increase was more than 100,000, the first time this has happened since (you guessed it) July 2009.

A final recession look-alike is in the earnings figures.

For the third month in succession, average weekly earnings (total pay) was exactly the same figure (£463); the average annual increase fell from 2.7 to 2.3 per cent (3 month average).

This figure was higher than it would have been because of large increases in bonuses, up 20.0 per cent overall and 21.7 per cent in the service sector. If we strip out bonuses, the figures for regular pay are ghastly, with the average annual increase just 1.7 per cent.

We can argue about whether a double-dip recession is in the offing, but as far as the world of work is concerned, it has already happened.

14 Responses to “Stories from the economy, or: The prospects for young people, and other grim tales”