Erika Watson gives guidance as to how Labour could provide for women in the economy. 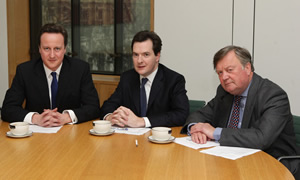 Erika Watson MBE is Director of Greenwell Consulting, where she specialises in inclusive enterprise, and is a chapter contributor to Labour’s Business: why enterprise should be at the heart of Labour politics in the 21st-century, published this week.

As women’s employment levels continue to sink at 10 times the rate of men’s, George Osborne has today rearranged a few deckchairs.

Childcare for two year olds, in exchange for £1.2 billion of tax credits clawed back from hard pressed families. For a Government which was apparently deeply worried about its growing unpopularity with women, the Autumn Statement has done nothing to reassure the one million plus women who need and want to work.

Where are the jobs for women, Mr Osborne? Not where you’re throwing investment for sure: not much anyway in construction, road building, or ‘energy-intensive industries.’

The only apparent growth sector for women’s employment is self-employment.  There has been a 10 per cent rise in the rate of female self-employment since 2009, compared to two per cent for men. That’s from a base where women in the UK were just half as likely to start a business as men. The gap is twice as wide for younger women; when women have the choice, they don’t often choose enterprise and the aversion starts early.

As it is, growing numbers of women don’t have much choice and, with a further 700,000 jobs to be axed from the public sector, where two thirds of employees are women, it’s going to get worse. So if more women are going to have to work for themselves, where, Mr Osborne, is the investment to help them to do so?

Yes, the plans for more business lending are welcome – let’s hope they are more successful than Project Merlin. But for a labour market culture change on the scale women are dealing with, what’s needed is real investment in skills and effective business support.  In place of this, the coalition government has scrapped that national business support service and replaced it with volunteers.

Skills support is particularly important for women, who mainly start businesses with lower levels of management experience and contacts. Because of this, those who start businesses particularly value enterprise training.  As well as helping to fill skills and knowledge gaps, training  helps to close the gap in confidence and business credibility and doubles the likelihood of women getting a venture off the ground.

Women also start businesses more gradually and with lower levels of finance; and here tax credits have been vital in enabling many more women to take that entrepreneurial risk.

As award winning female entrepreneur Nikki Hesford said to the BBC this week:

“Tax credits in particular have been absolutely brilliant, because they enable you, whilst you are setting up a business, as a single parent, to have some money coming in. Whilst your business is maybe not making anything to start with, at least you’ve got something to fall back on. And the tax credits will also pay for the childcare so that you can go out to work and get your business off the ground.”

There are good economic and social reasons for increasing the rate of women’s business ownership in the UK. It doesn’t need to be like this. Enlightened policy can and does make a difference.

While Labour government enterprise policy from 1997-2010 was far from perfect, it did aim to take into account the specific needs of women and resulted in a steady increase in the rate of female enterprise. And in the USA, sustained affirmative action policies introduced in the 1970s and 1980s are credited with bringing a generation of women into business ownership.

Equality at work matters too; and it was also in the firing line as today’s autumn statement took aim at employment protection safeguards. Women who do better in the workplace start businesses on a stronger footing.

Government has a role in enabling that level playing field and until it’s achieved, they need to recognise and support what’s distinctive about how women start and grow businesses – at all levels, from unemployed women who need to create their own job, to high flyers who want to grow substantial businesses.

It is time for a progressive women’s enterprise strategy: it’s time for jobs for the girls.

14 Responses to “Sisters are doing it for themselves, with no support from the autumn statement”