FIFA president Sepp Blatter caused outrage last night by saying footballers who had been racially abused should just “shake hands” with their abusers. 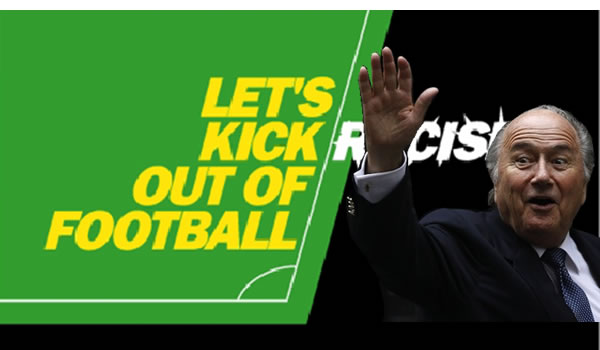 For the umpteenth time, FIFA president Sepp Blatter caused outrage last night by saying footballers who had been racially abused should just “shake hands” with their abusers, and that, despite all the evidence to the contrary, “there is no racism” in football.

In an interview with CNN, the head of world football, incredibly, unbelievably, said:

“I would deny it. There is no racism.

“Maybe one of the players has a word or a gesture which is not the correct one, but the one who is effected by that, he should say that ‘this is a game’.

“We are in a game, and at the end of the game, we shake hands, and this can happen, because we have worked so hard against racism and discrimination.”

He made his comments on the day Liverpool striker Luis Suarez was charged with racially abusing Manchester United defender Patrice Evra, and comes in the midst of the John Terry/Anton Ferdinand race row, with the England captain under investigation by the FA and Metropolitan Police.

Condemnation last night was universal, from anti-racism campaigners, players and across the Twittersphere.

Kick It Out described Blatter’s comments as “worryingly out of touch”, stating:

“Shaking hands to compensate for a racial slur is not what the game has signed up to, and trivialises the work of campaigns like Kick It Out, which has been in the vanguard of rooting out discrimination and unacceptable behaviour in our game for the best part of two decades.

“High-profile incidents have brought the issue of racism back into sharp focus. But complaints are still being lodged at grass roots level. Shaking hands doesn’t resonate with the zero-tolerance approach we encourage and certainly wouldn’t resonate with the victim of the abuse.”

“I feel stupid for thinking that football was taking a leading role against racism…..it seems it was just on mute for a while… Just for clarity if a player abuses a referee, does a shake of the hand after the game wipe the slate clean??”

“@SeppBlatter your comments on racism are so condescending its almost laughable. If fans shout racist chants but shake our hands is that ok?…Fifa clear up the blatter comments with a pic of him posing with a black man..I need the hand covering eyes symbol!! fifa.com/aboutfifa/orga…”

We’ve had the corruption, the sexism, and now the defence of racism; as Piers Morgan said, he “just gave every racist in football a licence to abuse”. In any other sporting organisation – any credible organisation in any field – not only would he have not survived this long, he surely wouldn’t be able to survive this. But this is no ordinary organisation – this is FIFA, byword for corruption, incompetence and mismanagement.

He will likely remain, and there’s seemingly nothing, nothing at all that Rio, the FA or anyone can do about it. Blatter is untouchable, football’s absolute monarch with all the power and no one to check him – least of all the members of the FIFA executive, themselves mired in scandal, loath to remove their protector.

Blatter’s attitudes belong in the dustbin of football history – and so does he.

• Action must be taken whenever racism rears its ugly head – including in sport – Sabby Dhalu, November 12th 2011

110 Responses to “He sees no corruption, hears no racism and speaks no sense: It’s time to kick Blatter out”