Alex Hern shows that the proposed Northern Line extension has always been condemned as "a cut-price stand-alone extension, built for one purpose only - private profit." 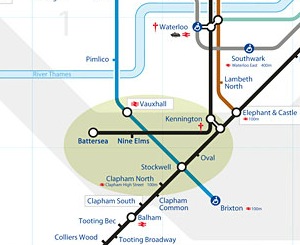 One of the smaller measures green-lit by the chancellor’s autumn statement is a two station extension of the Northern line in south London.

This development, which is likely to cost £350 million – deep-level tube lines don’t come cheap – has been condemned as a sop to private developers since it was first seriously proposed in May this year.

As prominent London blogger Diamond Geezer wrote back then:

The first stop on the new Northern line extension would be Nine Elms. This would serve the existing community, saving them a half-mile walk to Stockwell or Vauxhall, as well as serving the new US Embassy and a host of housing developments planned nearby. And the second (and final) stop would be Battersea.

Not the heart of Battersea where most people currently live, but the outskirts close to the famous derelict power station. Again the reason is regeneration, with plans afoot to turn Sir Giles Gilbert Scott’s electric cathedral into a massive complex of shops, offices, homes, hotels and “public realm”.

It’ll be both fantastic and ghastly, rescuing classic architecture by utterly commercialising it. And, of course, the whole thing’s only feasible if there’s a tube station next door. […]

These days, it seems, no new London transport development is possible without private money. […]

Why else do you think there’s that massive right-angled turn in the railway at Kennington? In any socially-motivated world the Northern line extension would continue straight on into poor old Camberwell, which is the biggest railway black hole in central London.

Instead the power station project acts like a giant financial magnet, tugging the tunnels away to where business requires it, not where communities might best be regenerated.

Notice how the proposed Northern line extension doesn’t link up with anything.

It zips straight across the Victoria line without any interchange being constructed (because a stop at Vauxhall would apparently overwhelm the existing station).

It stops really close to Battersea Park and Queenstown Road stations, but makes no attempt to join up with either (because connectivity to shops trumps connectivity to railways).

And it terminates well short of Clapham Junction, which would be an obvious next stop (because that’s where the money runs out).

In the 1960s the Victoria line was deliberately built to link up with everything it passed. In the 2010s we dare not link to anything in case passenger numbers create too much congestion.

This is a cut-price stand-alone extension, built for one purpose only – private profit.

So there you have it. An ill-thought out pork project which seems designed to get as little bang for it’s buck as possible. As necessary as stimulus is, it would be nice if it was done with a bit of competency.