Daniel Elton covers the latest data from YouGov and finds that unpopular as they may be, the Tories rhetoric on the economy still rules the roost. 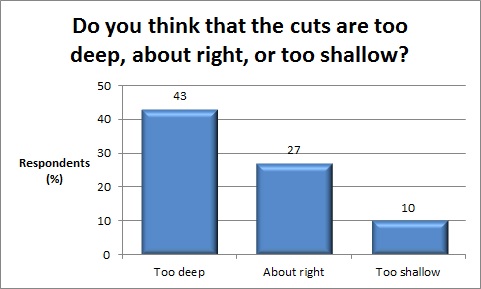 The Conservative Party is once again the nasty party of British politics. On the eve of the chancellor’s last ditch effort to avoid recession and the biggest strike in a generation, the electorate have decided that the Tories are essentially, not very nice.

In his latest commentary, polling company YouGov’s president Peter Kellner points out that barely a quarter of voters think the government is managing public sector cuts fairly, compared to 57 per cent who think they are  unfair. More than 2/5th of the electorate believe the cuts are too deep, while ten per cent think they are not deep enough and one quarter think they are about right.

It’s the same story across YouGov’s polling. When asked if the government is good or bad for ‘people like you’ more than half, 51 per cent, say no while less than a quarter – 23 per cent – say yes. 49 per cent of all voters think that it is more true of the Conservatives than any other party that:

“It appeals to one section of society more than to the whole country.”

If David Cameron’s leadership has been the search for a conservatism that makes voters feel part of one nation that can identify with his party, he has failed. “All in this together”, cosy webchats by the washing up and the big society have fallen flat.

The Conservatives may have spun their general election manifesto as “an invitation to join the government of Britain”, but the electorate has responded ‘no thanks’, having decided their not really like us, after all.

But the more critical political point may be that the Conservatives appear, at the moment, to have won the economic debate. Kellner highlights that:

“By two-to-one (56-27 per cent) voters think the public spending cuts are necessary. The proportion saying ‘necessary’ has remained stable since February. The only change since then is that slightly FEWER people say the cuts are ‘unnecessary’, while slightly more don’t know. The opponents of cuts have made no headway for the past nine months.

“More people still blame Labour (38 per cent) rather than the Coalition (22 per cent) for the current spending cuts. If anything, the coalition’s position has slightly improved since the summer, when blame for the Coalition reached 26 per cent on a number of occasions.

“In short, the Conservatives continue to win the argument that they are cleaning up a mess they inherited.”

Those on the Left may cling to the narrative that goes something like this: On the eve of the 2008 crisis, UK government debt as a proportion of GDP was still below that taken on by Labour in the ‘golden economic inheritance’ of 1997. Large government debt was wracked up by the need to bailout the finance industry. It is they who should pay, not public sector users and workers.

But to hold that narrative would put you in a minority. The public has signed on to Tory explanation that Labour deficits in the run up to 2008, often spent wastefully, made it harder for the UK to deal with the crisis, and the key to long-term stability is to cut away at the public sector.

“Bluntly, they [Labour] have failed to make an impact. This is why Labour’s voting-intention lead [with YouGov] averages just five per cent. At this stage in a parliament’s life, as we approach its mid-term, an economy as weak as Britain’s would normally expect to be accompanied by a double-digit lead for the opposition.

“Even worse for Labour, they actually lag behind on our ‘forced choice’ question: If you had to choose, which would you prefer to see after the next election, a Conservative government led by David Cameron or a Labour government led by Ed Miliband? Our latest figures show Conservatives/Cameron on 40 per cent and Labour/Miliband on 35 per cent.

“For the moment, the Conservatives seem to have the Teflon factor on their side, for they have managed to stop the autumn’s bad economic news from sticking to them and messing up their reputation.”

The Left can paint the Tories as nasty as it likes. As long as the public side with the government on the economic analysis, they will be extremely difficult to assail.

24 Responses to “Kellner: The public don’t like the Tories, but they’ve signed up to their economic argument”