Left Foot Forward’s Alex Hern explains why the 5.2 per cent inflation figure is far lower than that actually experienced by the poorest in society. 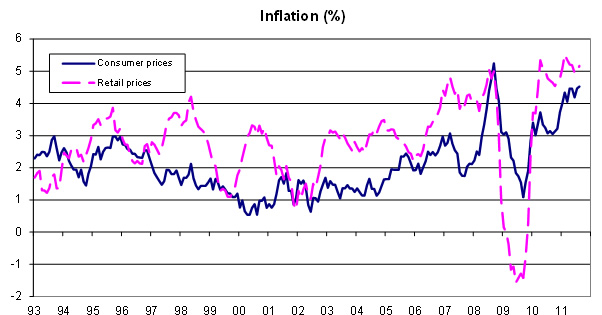 When the inflation figures came out last month, one could be forgiven for thinking that the only people surprised were the politicians.

Those of us who can’t expense our life have noticed the inexorable rise in costs over the past year, and although the eventual figure of 5.2 per cent for the CPI and 5.6% for the RPI may not have been the figure we’d have guessed (for those of us who attempt to predict such things), it is certainly in the same area.

In addition, it looks like even the silver lining of such high inflation figures may be stolen from us. Normally, the September figures for inflation are the ones used to determine how certain benefits are updated, and so a high rate of inflation in this month in particular means that the hardest hit will at least be slightly better off than otherwise.

Except that on Friday, the BBC was reporting that Downing Street had hinted it may use its discretion to cut even that small mercy:

The Financial Times is reporting that chancellor George Osborne has asked officials for alternative models, including a rise in line with average earnings growth of about 2.5% or freezing some payments.

It is understood the government will have “resolved” the options by early December when the uprating of benefits is presented to Parliament. The Institute of Fiscal Studies has calculated that the 5.2% September inflation figure will add £1.8 billion to welfare spending next year. It said freezing all benefits and pensions would save about £10bn and linking benefits increases to wage rises would save £5bn.

Inflation is a statistical measure, designed to capture the general increase in prices for the country as a whole. But in trying to do that, it whitewashes out the fact that the poorest in society have been by far the hardest hit. Even if Downing Street decides that trying to save money by enacting a real-terms cut to social security benefits and the state pension isn’t OK, those relying on them to live will still find life harder this year than last.

To see why, we need to take a look at the actual basket of goods (pdf): 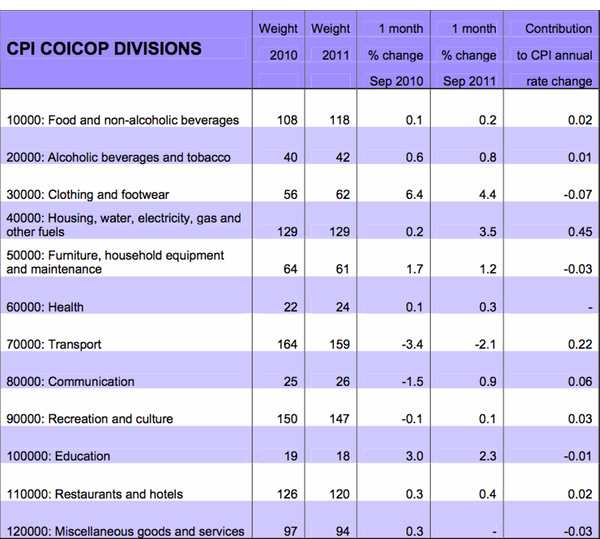 As you can see, the two biggest drivers to the increase in CPI were category 40000, housing etc., and category 70000, transport. Each of these are relatively highly weighted, representing well over a fifth of the basket between them, and they were both much higher than they were this time last year (transport is still on a negative trend, but less negative than in 2010). Almost as highly weighted as housing, however, is category 110000, restaurants and hotels.

Doubtless there are some people for whom restaurants and hotels represent as large a proportion of their annual expenditure as housing, water, electricity, gas and other fuels.

Indeed, there are likely some for whom the former is more. But for those whom a 5.2% increase year-on-year for their pension represents a signifiant proportion of their income, the fact that the monthly inflation for their housing is 3.5% is worrying. Yet the CPI weighting suggests that if housing costs are increasing by 3.5% a month while the cost of restaurants and hotels is decreasing at the same rate, then the hypothetical ‘average consumer’ should be exactly as well off.

I do not spend the same amount on restaurants as I do on housing. When the cost of my gas bills goes up by 13 per cent (pdf) in a month, I do not look to the fact that restaurants are staying the same price as a small mercy; rather, I look at restaurants as something that I stopped being able to afford some time ago.

These interesting priorities of the statisticians are mirrored on the level of the goods included; sometimes, they seem to be dry comments on our culture:

But these changes have real effects. Last year, Blu-ray players were added to “recreation and culture” section; as everyone would have predicted, their price has plummeted over the last year, and they will have contributed to the fact that their section showed just 0.1 per cent change.

The inflation statistics almost certainly are an accurate representation of the nation’s collective spending habits – I trust the bulging brains of the ONS statisticians on that matter – but they are woefully unfit for the purpose of working out how much harder life has got for those with the least discretionary income.

It is for this reason that groups which do try to create fair measures of the cost of living for those at the lower end of the wage scale report very different figures to the national inflation statistics. The London living wage increased by 5.7% this year – higher than both RPI and CPI – and that is calculated with reference to the median income, so stagnating wages mean that it did not increase as sharply as the cost of living did.

In addition, this calculation was made in the spring – before the massive leaps in utility costs which made September’s inflation figures so high – and deals with people who earnt a – comparatively high – £7.85 an hour.

The lower ones wage, the more disproportionately one is affected by the increases in the very basic cost of housing, a cost which is going up by 3.5 per cent each month. For those with money to spend on recreation and culture (0.1 per cent per month) or restaurants and hotels (0.3 per cent per month), stagnation in those areas may help a little; but many do not have that freedom.

If we cannot take them out of that poverty, we should at least make sure that the social safety net we use to help them is uprated according to their needs, not the needs of a mythical average consumer.

29 Responses to “Inflation is worse for the worst off”