Alex Hern asks why there is such silence from on the risk to democracy which the credit ratings agencies represent. 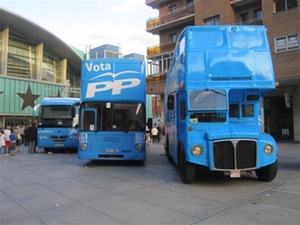 The credit ratings agency Fitch has announced that it will maintain Spain’s credit rating at AA- with a “negative outlook”, but has urged the country to take “additional measures”.

Fitch said in a statement to AFP:

If [Spain] is to improve market expectations of its capacity to grow and reduce debt with the confines of the eurozone, it must positively surprise investors with an ambitious and radical fiscal and structural reform program.

We already know the power that ratings agencies have – we covered it in March this year:

Governments that aren’t being seen to shrink the state and cut taxes for the elite risk having their national credit ratings downgraded.

Greece’s financial trouble for instance was sparked not by its inflated deficit, but by the downgrading of its government debt by the credit rating agencies. This had no basis in market fundamentals.

However, it caused the cost to Greece of servicing its debt to spiral out of control, thus forcing Greece to go cap in hand to the EU and IMF for a loan guarantee and brutally slash public spending and cut taxes for corporations.

Every occasion when a ratings agency makes veiled threats in an attempt to dictate a country’s fiscal policy is a hit to national sovereignty, as great as when the EU tells a nation that they need to shape up. And yet it is only the latter which draws the opprobrium of the right.

The Telegraph’s leader of November 11th:

Slavish adherence to the demands of monetary union has succeeded in the past week in dislodging two democratically elected prime ministers – George Papandreou (already gone) and Silvio Berlusconi (not yet gone, but going)…

We, and the other non-euro members, must act swiftly to safeguard our interests against increasingly undemocratic and economically unsound policy-making.

Fraser Nelson in the Spectator:

Democracy is viewed with caution – even distaste – by the Frankfurt Group, as are the markets. Juncker’s own views on pesky voters are famous since he phrased the problem of government thus: ‘We all know what to do, but we don’t know how to get re-elected once we have done it.’

We can now see a solution to the Juncker problem. You just enstool various leaders who were not properly elected in the first place and who won’t be seeking votes again. And have them do what you like.

And the king of the genre, Simon Heffer in the Mail:

Once, it would have taken an invading military force to topple the leadership of a European nation. Today, it can be done through sheer economic pressure: it might be that within a few days the Germans – along with their French allies – will have secured regime change in the two most tiresome countries in the eurozone.

The EU is, at least, a union of elected governments enforcing economic stability within its own borders. The ratings agencies are beholden to no-one save their shareholders, and are usually not even based in the same countries as those they are threatening.

Given all of the uproar over former, hopefully it can’t be too long until the deafening silence of the right over the threat to democracy from the latter ends. We can but dream…

9 Responses to “If the right cares about sovereignty, why the silence on credit agencies?”