Alex Hern runs through the latest economic indicators, and what they mean for future growth - they are not good for George Osborne. 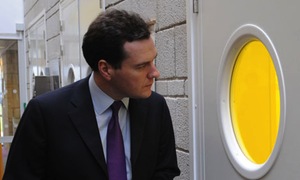 The OECD has cut its growth prediction for the UK for the seventh month running. Its report vindicates Labour’s charge that the slowdown the UK is experiencing has nothing to do with the Eurozone crisis, but it also highlights the fact that this downgrade is happening worldwide.

At the start of a week that will provide a snapshot of inflation, unemployment and high-street spending, the Organisation for Economic Co-operation and Development (OECD) appeared to bear out the main charge made by Labour: that the slowdown in the UK economy predated the intensification of the eurozone crisis.

But the OECD report also showed Britain was not alone in experiencing a gloomier economic outlook, with the other six members of the G7 group of industrial nations – the US, Canada, Germany, Japan, Italy and France – all experiencing slowdowns.

The darkening international picture will enable the government to argue that weaker growth, higher unemployment and a bigger budget deficit are the result of factors beyond its control.

The dropoffs occurred in the OECD’s composite leading indicators, statistical measures designed to indicate whether an economy is on track for recovery. A CLI of over 100 implies that growth will rise above the long-term trend, and under 100 means that it will drop below.

As the Wall Street Journal reports (£), the numbers aren’t looking so good:

The UK’s CLI has dropped from 99.8 to 99, as the OECD’s own news bulletin shows (pdf). The indication is that our growth will drop below long-term trends – and our long term trends have not exactly been strong. On Wednesday, the bank is expected to cut 2011’s growth forecast from 1.5 per cent to one per cent, and if the OECD is correct, the trend is only downwards from there.

Also today, we learn that CPI is “only” 5.0 per cent, down 0.2 from its high of 5.2 per cent last month. This will likely put more strength behind Osborne’s stated desire to ignore the September figure when uprating benefits, as is normally done, and instead increase pensions and other payments by below-inflation.

Although a drop in inflation is good news, this graph from Markit economics shows clearly why that figure is still far too high to be sustainable: When price inflation is outpacing wage inflation by over two per cent, life will get harder very quickly.

Finally, the youth unemployment figures are to be released tomorrow, and they will almost certainly show that more than one million people between the ages of 18 to 24 are unemployed – the highest number since this statistic began being recorded in 1992.

The government is already attempting to spin the figures by implying that they are only so high because of a change in measurement.

Under the last Labour government, only young people claiming Jobseeker’s Allowance for more than six months were classed as long-term unemployed. After 10 months claiming the benefit, most of them were automatically moved onto a training “allowance”, another type of state benefit.

However, the Coalition has introduced a scheme called the Work Programme which gives young people work experience or training while they continue to claim Jobseeker’s Allowance.

Therefore, the number of young people recorded as long-term unemployed has risen sharply once again by 64 percent this year to about 120,000 – almost exactly the same level as before Labour started reclassifying benefit claimants.

Even taking their claims at face value, this reclassification is responsible for only about 73 000 claimants being counted who wouldn’t be otherwise; meaning that these numbers are still the worst they’ve ever been: Still, it could be worse; we could be in Greece.

14 Responses to “OECD: The economic indications are not good for Gideon”