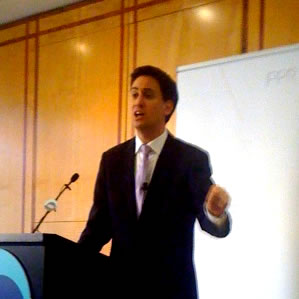 In a wide-ranging speech on the economy to the Institute for Public Policy Research (IPPR) in the City this morning, the Labour leader described Tuesday’s statement as marking “a crucial moment in the economic course of our country”, one in which the public learn “the biggest economic gamble in a generation has failed”.

Appealing to those who backed the coalition’s deficit reduction plan when unveiled, who “were willing to give the government the benefit of the doubt 17 months ago”, he said:

“Why the government no longer deserves the benefit of the doubt, is that even on this measure [deficit reduction] – the central test they set themselves – the plan isn’t working.

“It isn’t working because their failure to get businesses growing, to see more jobs created, has locked them, and the country, into a vicious cycle on the deficit.

“With low growth, more people out of work claiming benefits, and less paying tax, and higher borrowing as a result.”

“The government’s plan is not working, despite all the difficulties, there can be an alternative – and the alternative is the plan for growth and jobs we need.

“It’s not as if the government wasn’t warned. The August 2010 Bloomberg speech given by Ed Balls, Labour’s shadow chancellor, has turned out to be extremely prescient.

“He was willing to break the consensus and he called it right.”

Citing indicators to back up his claims the government was failing, Miliband said:

“On inflation, the CPI has now been 4% or above for the entirety of 2011. For the last two months it has been 5% or over, in part because of the decision to raise VAT.

“So on growth, jobs and inflation it is clear that the last 17 months have not seen the scenario George Osborne set out. And the failures on growth, unemployment and inflation has had real effects on the deficit.

“The government’s own forecasts told us the cost of that failure back in March: £46bn additional borrowing in the coming years. More recent forecasts have put the figure at over £100 billion.

“When a further rise in planned borrowing is confirmed by the Office for Budget Responsibility next week, it will be a catastrophic blow to the Government’s credibility.”

“Let us be clear where the government will end up on Tuesday if they do not change course. Refusing to choose a slower deficit path that protects jobs and growth. Instead they will be dragged to higher borrowing by the costs of their failure on unemployment and growth.

“So for those that look again, and are convinced that it is wrong to say that there can be no alternative, what is the alternative available to them? The truth is the government knows it needs one, but is hamstrung by not wanting to admit it.

“So we will look at what they propose in the autumn statement, but the evidence so far is not encouraging A housing announcement which simply restored 10% of the cut in the housing budget An infrastructure scheme which relies on others to act – and which is likely to take quite some time to take effect.

“A welcome reversal of the government’s mistake on youth jobs, but with a catastrophic mistake.”

He ended by once more calling on David Cameron and George Osborne to change course, take responsibility and get the economy moving:

“If our only answer is to shrug our shoulders in response to this, we will be failing not just the next generation but our country too. I believe those with power have a responsibility to those without. Never to shrug their shoulders. Never to say there is no alternative.

“Next Tuesday must be the moment they take responsibility, and think again. Nothing less will do from Mr Osborne and Mr Cameron. That is the responsibility on this government. It is a responsibility which we will do everything we can to make them face up to.”

• Osborne should change course next Tuesday, but he won’t – Tony Dolphin and Adam Lent, November 23rd 2011

• Unprecedented growth of 1.3 per cent needed for OBR to meet its projection – Will Straw, October 31st 2011