Kevin Meagher reports on the effects of the coalition’s cuts on the Northern Ireland peace process, which Martin McGuinness says are having a “damaging effect”. 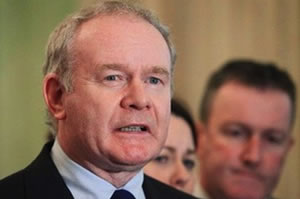 Speaking to the Irish Post, the Sinn Fein politician blasted UK ministers for failing to deliver promised investment in infrastructure projects in order to tackle the chronic, generational unemployment across Northern Ireland.

This is having a “damaging effect” in terms of “people’s perceptions of whether they are benefitting from the peace process” he says.

The effects of spending cuts are exacerbated by David Cameron’s lack of interest in Northern Ireland, with frequent complaints from within the Executive that Northern Ireland’s ministers have found it markedly more difficult to engage Downing Street directly since the general election.

“It is not the same relationship… We had a very close relationship with the Blair government. Blair was the first prime minister in the history of relations between Britain and Ireland to do the decent thing by Ireland and made a major contribution by bringing about the Good Friday Agreement.”

“I’ve always been of the view that the Conservative party didn’t have the same empathy with people in the North.”

Complaining that £4 billion worth of badly need investment was not forthcoming, he said:

“We find ourselves in a situation where this government effectively reneges on the financial commitment that was agreed with the Blair government and Gordon Brown, prior to the establishment of the institutions.”

Northern Ireland should not be treated like other parts of the UK, as the government aims to reduce the “overreliance” on the state and promote private sector growth instead. Ministers do not seem to realise that in Northern Ireland’s case, the public sector, historically, has pretty much meant the British Army.

As McGuinness puts it:

“It is clear to me that there is a lack of appreciation in this administration. We have been through a very important peace process and have a responsibility to show people on the ground that there are benefits to peace.”

With an upsurge in dissident republican activity any risk that increasing numbers of people do not recognise those benefits should set ministerial alarm bells ringing and free up some meeting slots pronto.